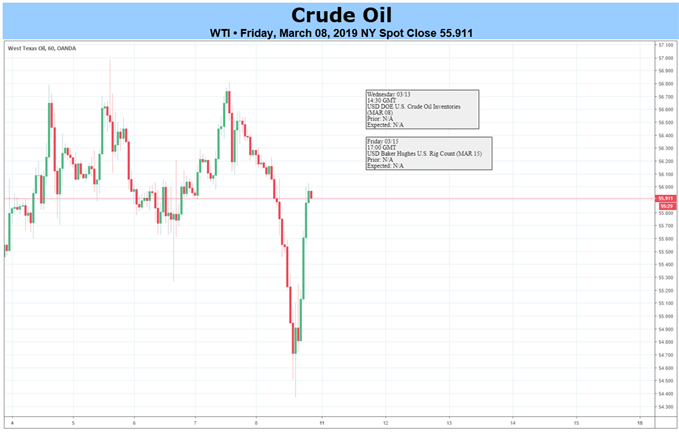 Oil threatens the range-bound price action carried over from February, with crude slipping to a fresh monthly-low ($54.52), and the weakening outlook for global growth may continue to drag on energy prices as the U.S. and China, the two largest consumers of oil, struggle to reach a trade deal.

The recent tweet from President Donald Trump appears to have to tamed the near-term advance in crude as the rebalancing efforts by the of the Petroleum Exporting Countries (OPEC) and allies come under scrutiny, and developments coming out of the U.S. economy may continue to sway oil prices as crude inventories jump 7069K in the week ending March 1.

The updates from the Energy Information Administration (EIA) also showed weekly field production of crude holding steady at the record-high of 12,100K b/d, and signs of easing demand paired with the gradual rise in non-OPEC production may keep crude prices under pressure as the OPEC+ alliance is set to expire in June.

It remains to be seen if OPEC and its allies will adjust the six-month extension amid the mixed comments coming out of Russia, and crude prices may find little relief over the near-term as Energy Minister Alexander Novak notes that the region is on track to meet its commitment of reducing output by 228Kb/d by the end of March.

With that said, oil prices stand at risk of facing additional headwinds ahead of the next OPEC meeting in April amid the uncertainty surrounding the global economy, and the near-term recovery in crude may continue to unravel unless the group takes additional steps to rebalance the energy market. Sign up and join DailyFX Currency Analyst David Song LIVE for an opportunity to discuss potential trade setups.

Looking for a technical perspective on the oil? Check out the Weekly Oil Technical Forecast.

The advance from the 2018-low ($42.36) appears to have stalled amid the string of failed attempts to close above the $57.40 (61.8% retracement) hurdle, with crude failing to preserve the upward from December as it snaps the range-bound price action carried over from the previous month. The Relative Strength Index (RSI) may highlight a similar dynamic over the coming days as it flops ahead of overbought territory and falls back towards trendline support.