– A continual reassessment of expectations around how the US economy performed in Q1’19 has filtered through into rate expectations evolving in a more supportive way for the US Dollar.

– As both American and Chinese officials talk in more optimistic tones, it appears that we’re in the final stages of the trade war talks.

– Retail traders continue to sell the US Dollar, and moreover, buy EURUSD as it approaches it yearly lows.

The US Dollar (via the DXY Index) is heading into the weekend on solid footing following the March US Nonfarm Payrolls report. While the initial reaction didn’t inspire much upside, it appears that a continual reassessment of expectations around how the US economy performed in Q1’19 has filtered through into rate expectations evolving in a more supportive way for the US Dollar (indeed, this trend predated the US jobs report). Two key themes will be in the news over the weekend that could very-well lead to gaps in price come Sunday when markets open.

Chinese Vice Premier Liu Hue has been in Washington, D.C. the past few days meeting with his American counterparts, US Trade Representative Robert Lighthizer and Treasury Secretary Steve Mnuchin. Reports on the trade talks have been optimistic, with US President Donald Trump indicating that he could meet with Chinese President Xi Jingping by the end of May in order to finalize an agreement. It’s very possible that we’re in the endgame now.

But despite all the optimism, a few key issues remain. Forced intellectual property transfers from foreign companies to the Chinese government remains an issue for the Americans, while the heavy-handed tariffs levied by the Trump administration continues to both the Chinese. Similarly, the viability of an enforcement mechanism is being discussed. Headlines over the weekend could truly break either way; don’t be surprised if there is a gap open over the weekend thanks to the ongoing US-China trade talks.

Commentary from a Labour party spokesperson today poured cold water on hopes that a Theresa May-Jeremy Corbyn attempt at a “national unity” deal would come together before the April 12 Brext deadline. Yet with UK PM May’s government proving either unwilling or unable to change the tenets of the negotiation – that the EU-UK Withdrawal Agreement must be upheld, as well as the joint EU-UK Political Declaration – it appears that a deal may not yet come together.

European Union leaders and officials have been quite vocal in recent days, from Michel Barnier (lead Brexit negotiator) to Guy Verhofstadt (MEP from Belgium) to Donald Tusk (president of the European Council) to Angela Merkel (German chancellor). There are a few common themes: the EU will stand behind Ireland; the UK needs to decide how it wants to Brexit; the EU-UK Withdrawal Agreement must be upheld; and that any extension to the deadline must go in hand with meaningful political action – binding votes or perhaps a call for a General Election.

No matter what, the EU continues to act as if it has no desire to resolve a domestic UK political issue. If the UK leaves the EU, it won’t be due to the EU pushing it out the door. 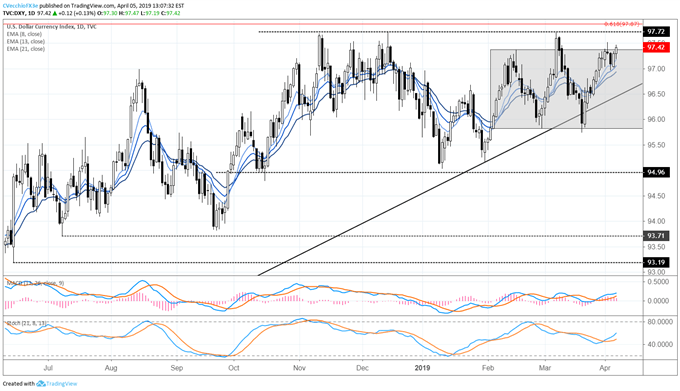 After moving past 97.37 to the topside earlier this week, it appears that the DXY Index is on the verge of closing above 97.37 for just the second time in 2019. Accordingly, there’s a growing possibility for a move back towards the 2018 highs near 97.72 (and beyond). Bullish momentum continues to build with the near-term with price stretching further above its daily 8-, 13-, and 21-EMA envelope while both the daily MACD and Slow Stochastics push higher above their respective signal/median lines.