See our quarterly forecast to learn what will drive prices throughout Q2!

Is Volatility Back on the Rise?

US equities have come under notable pressure throughout the week with the S&P 500 down over 2%. Consequently, this has coincided with a jump in the VIX (the fear gauge), which closed at its highest level since January after President Trump upped the ante against China, having tweeted that the US will raise the tariff rate to 25% from 10% on $200bln worth of Chinese goods.

Throughout 2019, US equities have enjoyed a period of subdued volatility with the VIX dropping over 40% since the December 2018 highs. In turn, this saw the S&P 500 gain over 17% to hit fresh record highs amid increased hopes of a trade deal, alongside a dovish pivot from the Federal Reserve, while recession fears had also receded. However, with the VIX back on the rise, this poses a threat to the relatively lofty levels in US equity markets. 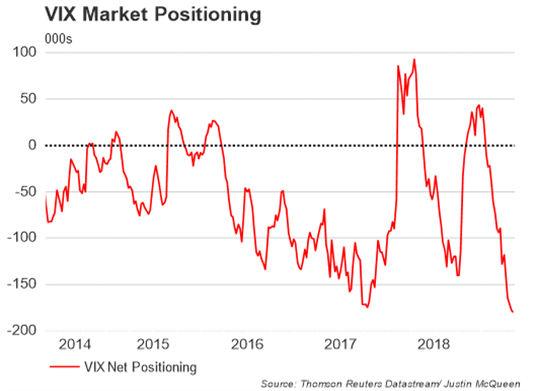 Amid the latest surge in the volatility index, questions will be raised as to whether we will likely see a VIX blowout that we witnessed last February (full story) given the record short positioning in VIX futures. While positioning may be extreme on both outright net shorts (180k contracts) and as a ratio of open interest (40%), fears of a VIX blowout similar to that of February 2018 may be misplaced with open interest noticeably lower at 450k, from 650k back in early 2018. Alongside this, after last year’s event many inverse volatility ETPs had also been terminated, however, this does not rule out that volatility can be elevated.

Following the rising trade war tensions between the US and China, the VIX futures curve has inverted. Typically, the VIX curve tends to be in contango, meaning that the curve is upward sloping with investors more uncertain about the longer-term outlook relative to the short term. However, amid the aforementioned trade war tensions, the front month is now trading above the second month by 63bps, leading to a VIX curve inversion (backwardation). This implies that equity investors are much more concerned in the short-term but given that the front month contract expires on May 22nd, this does suggest that higher volatility may not persist. That being said however, VIX curve inversions have preceded equity market routs, most notably when the curve inverted last year on February 2nd, the S&P 500 plunged over 6% in the following sessions, 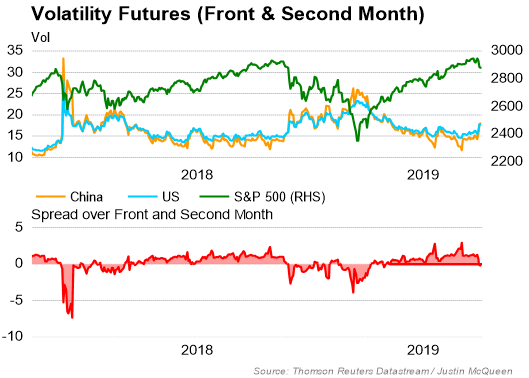