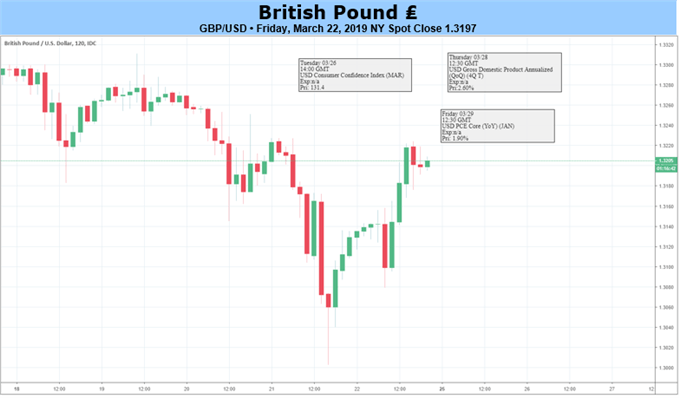 This week the EU gave the UK further time to pass the Withdrawal Agreement – although they refused to make any concessions whatsoever to the bill – shifting the end date to May 22 if PM May gets the necessary votes in Parliament next week to pass her proposal. This remains unlikely at the current juncture and if PM May loses again, the UK would only have until April 12 to either suggest a new course of action, agree to a long extension or leave the EU. According to European Council President Donald Tusk ‘all options will remain open’ to the UK until April 12.

It is likely that over the next few days a variety of opinions and options will be aired but unless any of these options finds a consensus in the House of Commons, then a Hard Brexit option remains. While neither side wants this scenario, the odds on it happening will narrow if PM May fails in the House for a third time.

UK data prints have met or beaten expectations this week, with record high employment figures, solid wage growth, core inflation nudging 0.1% lower to 1.8% y/y, while UK retail sales surprised to the upside on Thursday. The UK economy remains stuck between record low unemployment, positive real wage growth and weak growth, a headache down the line for the Bank of England. Next week the only domestic data of note is the final look at UK Q4 GDP on Friday with a quarterly figure of 0.2% and an annual figure of 1.3% expected to be confirmed.

Against this backdrop, GBPUSD is ending the week around 1.3190, just over one cent off its high print on Tuesday and around two cents higher than its low print on Thursday. Sterling volatility remains high and is expected to stay at these levels over the next few weeks.

IG Client Sentiment data show 56.4% of traders are net-long GBPUSD. We typically take a contrarian view to crowd sentiment, and the fact traders are net-long suggests that GBPUSD prices may fall. However, if we factor in recent daily and weekly positional changes, we get a stronger GBPUSD bearish trading bias.