– Japan’s “Golden Week” – a period at the end of April/beginning of May with several holidays clustered together – will see Japanese markets closed from April 29 to May 7.

– The last time Japanese markets were closed while global markets were otherwise open was in January 2019 – which precipitated the liquidity conditions that led to the Japanese Yen flash crash.

It’s the end of April, which means it’s time for Japan’s “Golden Week.” The Golden Week is typically a period at the end of April/beginning of May that encompasses several holidays during a short timeframe, and due to the inefficiencies of frequently opening/closing businesses, many factories shutdown and offices work on skeleton crews. In turn, Japanese financial markets are also closed.

The implications of Japanese financial markets being closed bears particularly attention this year, given events that have transpired in the recent past. Recall what happened at the start of January 2019: Japanese markets were closed while global markets were otherwise open. During the crossover session between North American trading and Asian trading, an earnings warning by Apple sent traders scrambling; programmatic trading algorithms kicked in, selling highly correlated assets across the board in quick succession.

The benefit of hindsight informs us that the January 2019 Japanese Yen flash crash was product of the market conditions at hand – a slew of factors that rarely line up all at once. While a Yen flash crash during Golden Week is not our base case scenario, traders should be fully aware of the risk that comes with holding open JPY positions over the coming days – there is more risk now than usual. If there is abnormal activity in the JPY-crosses over the coming days, look no further than AUDJPY price action. 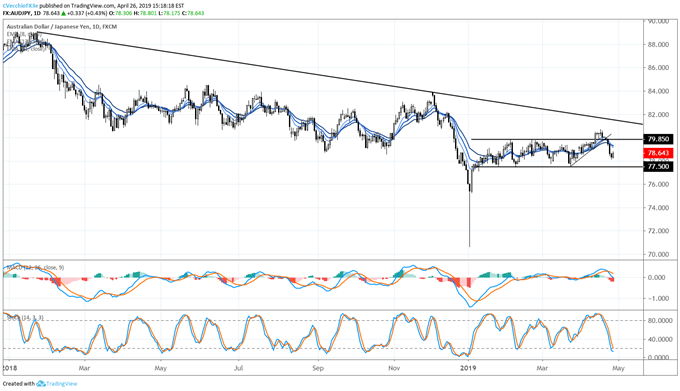 Since shortly after the Yen flash crash in January, AUDJPY prices had been consolidating in a sideways pattern between 77.50 and 79.85 until April 12.For a few days in mid-April, the path of least resistance appeared to be to the topside for AUDJPY. But it now appears that a “false breakout” condition has emerged, now that AUDJPY price has returned under 79.85.

Compounding the reversal has been the fact that the trendline from the March and April swing lows has been broken. AUDJPY price is now below the daily 8-, 13-, and 21-EMA envelope, while Slow Stochastics has fallen into oversold territory and daily MACD has started to move below its signal line.

In line with a principle of technical analysis that a false breakout from a consolidation often yields a return to the other side of the consolidation (i.e. if prices broke through consolidation resistance and returned into the consolidation, then odds would increase that price would revisit consolidation support). Accordingly, a move back towards 77.50 shouldn’t be ruled out. 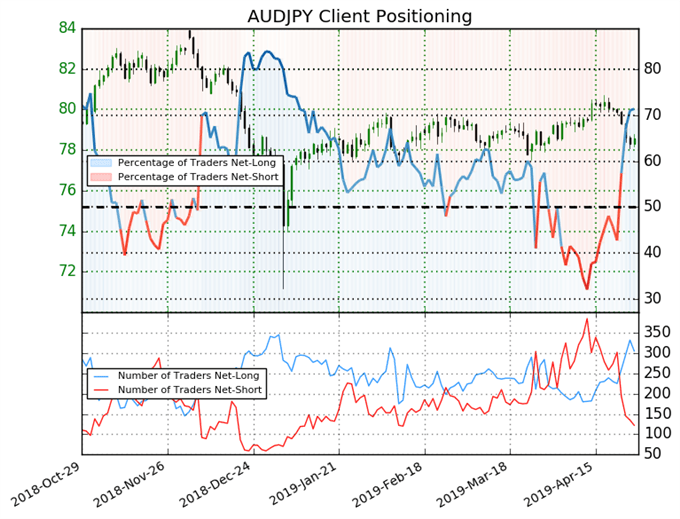 We typically take a contrarian view to crowd sentiment, and the fact traders are net-long suggests AUDJPY prices may continue to fall. Traders are further net-long than yesterday and last week, and the combination of current sentiment and recent changes gives us a stronger AUDJPY-bearish contrarian trading bias.