– The April Canada jobs report (detailing the employment change and unemployment rate) is due on Friday, May 10 at 12:30 GMT.

– Consensus forecasts have the Canadian labor market reasserting strength in April, due to post a gain of 11.6K jobs, the unemployment rate to stay on hold at 5.8%, and average hourly wages to have increased by 2.3% (y/y).

After a surprisingly weak print in March, the Canadian labor market is looking for a modest rebound in April. Bloomberg News consensus forecasts call for the April Canada jobs report to show that the economy added 11.6K jobs after losing -7.2K in March. Even so, the six- and 12-month rates of jobs growth are 35.6K and 27.6K, respectively. The unemployment rate is due to stay on hold at 5.8% where it has since January 2019.

The contraction in March was only the fourth month the Canadian economy has lost jobs since the start of 2017. Given that crude oil prices rebounded over the past several months, there may have been spillover into the Canadian energy sector (which accounts for roughly 11% of Canadian GDP), helping spur job creation and thus a rebound in the upcoming April Canada jobs report.

Overall, traders have had little reason one way or the other to change their expectations about the Bank of Canada’s rate trajectory for 2019. At the start of April, overnight index swaps were pricing in a 21% chance of a 25-bps rate cut by the end of September; now, those odds are barely higher at 24% (despite the BOC saying that rate hikes were completely off the table at their recent policy meeting). 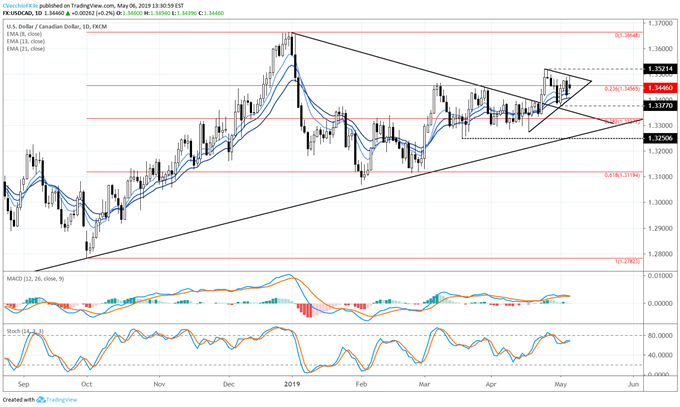 USDCAD prices established a bearish outside engulfing bar on Friday, but the gap open higher at the start of the week has negated the potential bearish tone that might have otherwise been established. Putting price action in context of the symmetrical triangle forming going back to the yearly high, USDCAD’s recent pullback may have simply been a retest of former resistance turned support. As such, the path of least resistance may be the topside in the near-term.

With another smaller triangle having formed over the past two weeks of trading following the breakout of the larger symmetrical triangle, USDCAD prices appear to be coiling again before their next move. Accordingly, traders may want for a break of the April high at 1.3521 or the May low at 1.3377 before the next directional move in USDCAD prices is forecast with more confidence. 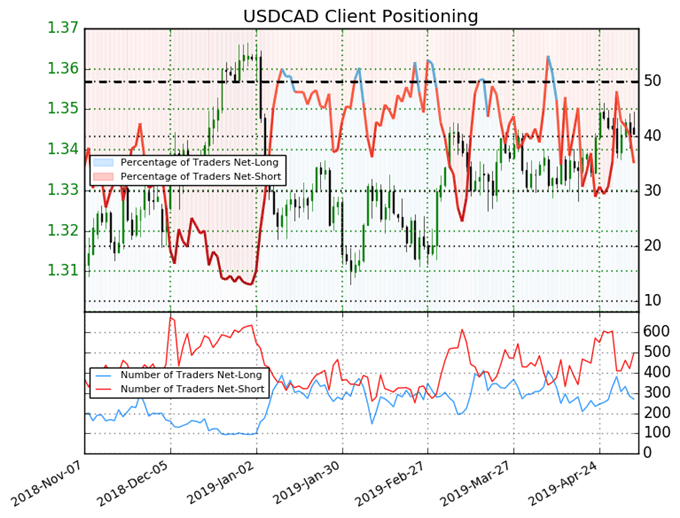