– The April European Central Bank rate decision is on Wednesday, April 10 at 11:45 GMT.

– No rate move is anticipated at the April ECB meeting, but a greater discussion about the new TLTRO program and the effects of negative interest rates could be prominent.

– Retail traders are net-long EURUSD, but have swung to net-short EURJPY..

Eurozone economic data momentum has disappointed in recent weeks, particularly following the March European Central Bank rate decision. Since its high on March 21, the Citi Economic Surprise Index for the Eurozone has fallen from -25.1 to -59.1. ECB President Mario Draghi’s preferred gauge of inflation, the 5y5y inflation swap forwards, have been falling all month long, hitting a high on March 5 at 1.510% before settling at 1.365% the week before the April ECB meeting.

There’s little reason to think that the conditions in front of the Governing Council will warrant a change in tone beyond their dovish shift seen last month. They’ve already eliminated their previous forecast of a rate hike sometime around “summer 2019,” and rates markets are leaning more into a rate cut (15.7%) than a rate hike (9.9%) by the end of the year. Being pragmatic, it seems unlikely that the new ECB president makes a policy change at their first meeting with new Staff Economic Projections; Draghi steps down in October 2019.

Given the discussion by ECB President Draghi about negative interest rates and their impact on the banking sector during the interim period since the last meeting, traders should be mindful of a potential discussion in this area. 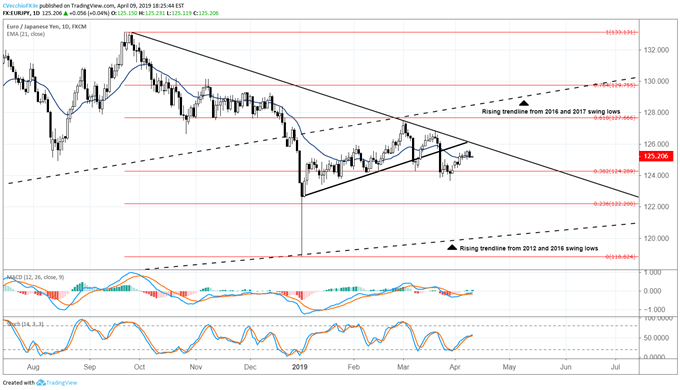 EURJPY’s progress at the start of April has been stunted in the run up to the April ECB meeting. Price is once again enmeshed in the daily 8-, 13-, and 21-EMA envelope. As a result of sideways trading at the start of the week, price remains in the downtrend from the September 2018 and March 2019 highs. Both daily MACD and Slow Stochastics have returned back to neutral positioning since last week. At this point in time, we can’t yet rule out another test of the descending trendline near 126.000 before EURJPY bears take another attempt at pushing price lower. 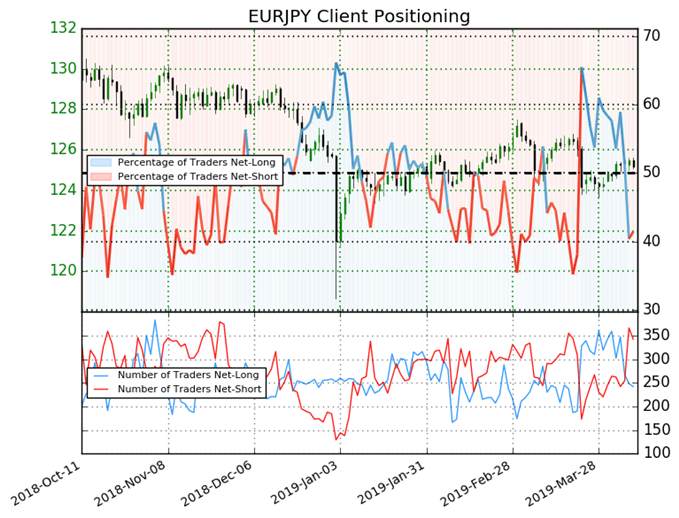 We typically take a contrarian view to crowd sentiment, and the fact traders are net-short suggests EURJPY prices may continue to rise. Traders are further net-short than yesterday and last week, and the combination of current sentiment and recent changes gives us a stronger EURJPY-bullish contrarian trading bias.