First-quarter technical and fundamental forecasts from the DailyFX analysts are out now.

Global growth is unarguably slowing. Why are growth-sensitive assets such as the Australian Dollar apparently so sanguine?

The latest gloomy economic data came from China. Its official manufacturing sector Purchasing Managers Index for February swooned to a three-year low and extended its run of contractionary, sub-50 readings out to a third straight month.

Moreover, this was simply the latest in a queue of weaker numbers which have trickled out from around the world with worrying regularity. In Europe, where Italy flirts with recession and even mighty Germany is clearly in the doldrums, Brexit turmoil seems only likely to depress growth still further.

The US’ own manufacturing PMI remains well above the 50 line. Even so it wallows at 17-month lows. To be sure, global oil prices are well above their December nadirs of $42/barrel, but they might well be a lot closer to that without supply cuts from traditional producers. The $76 peaks of December are far above an energy market hardly shrieking of global optimism.

And yet the Australian Dollar remains well above its formerly dominant 2018 downtrend and the New Zealand Dollar has been creeping back upward since mid-month. Stock markets are showing signs of diminishing momentum, but uptrends there clearly endure. 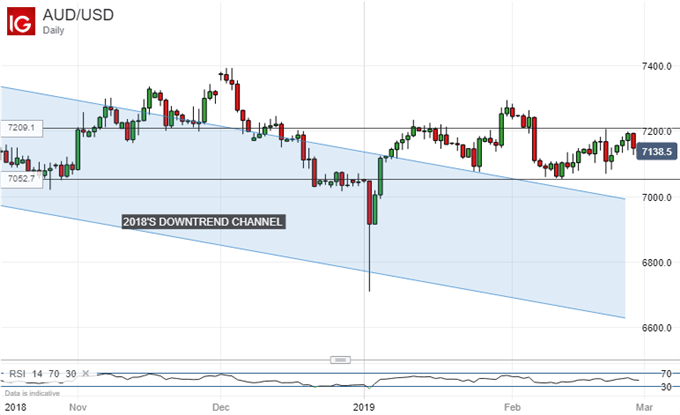 Well, there is one big risk to the bear thesis that has yet to play out. The prospect that China and the US will manage to cobble together some sort of trade agreement still hangs hopefully over all markets. Donald Trump expressed optimism last week that talks were proceeding well. Indeed, he shelved plans to increase tariffs on Chinese imports and held out the prospect of a summit with his Chinese counterpart XI Jinping if the two countries can move further forward.

While this upbeat narrative is in place, investors seem prepared to bet that the world economy’s wheezing engine can be jump-started once more.

This may of course be untrue. The global cycle looks mature in any case, stocks’ bull run since 2009 is now quite elderly. Ballooning corporate debt is a huge worry, perhaps especially in China and Europe. A trade deal might help but, beyond an initial feelgood factor. it may not be the silver bullet for demand that market optimists seem to think.

Of course, economic weakness will probably also lead in time to yet more monetary stimulus. This is a nexus to which investors have become very used in the post crisis years. Easier monetary policy usually leads to stronger stock markets and yet-more-buoyant risk appetite.

This process may come into view yet again, especially if a trade settlement comes with it. But in the end the data are going to win, and at the moment much of them are looking decidedly ‘risk off.’