Most ASEAN currencies appreciated against the US dollar this past week, owing to a surprisingly more-dovish-than-expected Fed rate decision. In addition, sentiment generally recovered throughout most the week heading into the FOMC. Most notably, the S&P 500 at one point breached critical resistance before turning back lower on Friday.

USD/IDR saw most of its decline in pre-FOMC trade, with losses pausing after the Bank of Indonesia rate decision afterwards. While benchmark lending rates were left unchanged, the central bank said that it will raise loan-to-funding ratio reserve requirements as it takes on accommodative policies to push for domestic demand. After hiking rates aggressively last year, this was seen as a step away from monetary tightening.

There was a slightly different story from the Philippine central bank last week. Heading into it, USD/PHP rose on more dovish prospects after newly-appointed Governor Benjamin Diokno alluded to cuts in reserve requirement ratios (RRR). However, the Philippine Peso then regained ground after there were no mentions of cutting RRR in the statement, disappointing some dovish bets. USD/SGD was little change by the weekend. 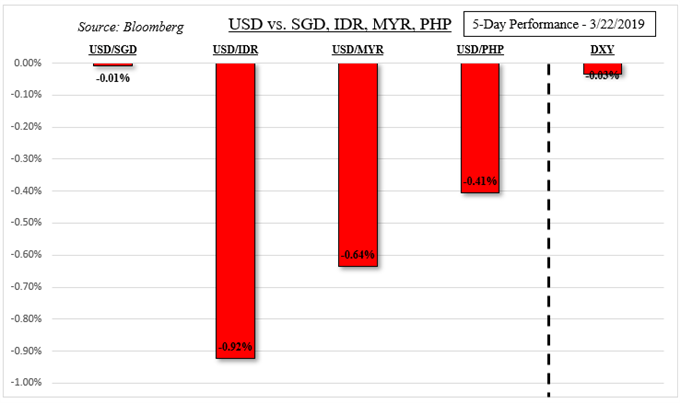 The regional ASEAN economic docket thins out in the week ahead following two central bank rate decisions. Singapore will be releasing February inflation and industrial production data. Regardless, USD/SGDtends to have a close relationship with DXY and its movement in the medium-term may be dictated by the Greenback. For risk trends, do keep an eye on Chinese industrial profits on Wednesday.

Speaking of sentiment, ASEAN currencies such as the Malaysian Ringgit could be left vulnerable if global equities turn lower ahead. Lately, there have been rising concerns about a recession in the world’s-largest economy. Looking at the chart below, a closely watched section of the US yield curve, the gap between 3-month and 10-year government bond yields, flipped negative for the first time since 2007. 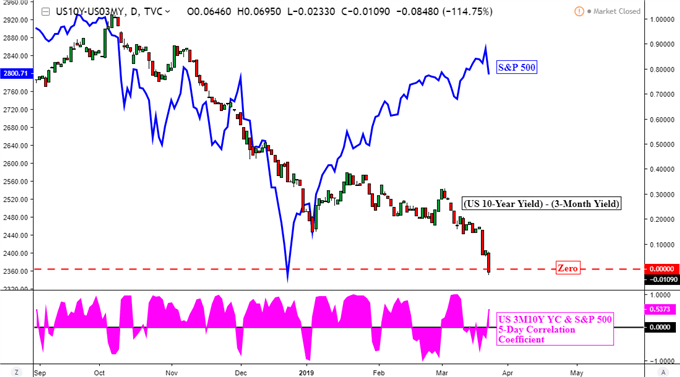 In times of risk aversion, the highly-liquid US Dollar can benefit from haven demand. With that in mind, attention turns to a slew of important domestic data. Next week offers US consumer confidence, GDP and PCE core (the Fed’s preferred measure of inflation). Lately, economic data has been tending to underperform relative to economists’ expectations. If more of the same fuels risk aversion, USD may rise.

As such, sentiment-linked ASEAN FX may succumb to selling pressure in such circumstances. Another risk for stocks, a wildcard perhaps, is what could happen if UK Prime Minister Theresa May fails to pass her Brexit deal in Parliament for a third time. This may increase the odds of a ‘no-deal’ divorce unless the nation participates in EU parliamentary elections.

There will also be a slew of European Central Bank speakers in the week ahead offering commentary in the aftermath of a more-dovish ECB rate decision. Rhetoric that echoes and builds on a more pessimistic outlook could scare investors. As such, treat losses in USD/IDR, USD/PHP and USD/MYR with caution.

To contact Daniel, use the comments section below or @ddubrovskyFX on