Despite a push on the upside towards the last few days of this past week, the US Dollar ended relatively unchanged against its major counterparts when looking at its 5-day performance. Initial weakness was compounded by a stronger British Pound amidst fading ‘no-deal’ Brexit bets. But the Greenback turned around as better-than-expected US GDP data lifted local front-end government bond yields. This trading dynamic continued as USD appreciated alongside souring sentiment on Friday.

When looking at some of its ASEAN peers, the Singapore Dollar and Indonesian Rupiah underperformed. The former tends to follow DXY particularly closely follow. Meanwhile, the Philippine Peso gained. Newswires attributed this to strong Philippine weekly foreign portfolio net inflows which clocked in at $125.4m, the most since late January. USD/PHP also fell when China’s Caixin PMI beat estimates, cooling economic growth slowdown fears in the world’s second-largest economy. 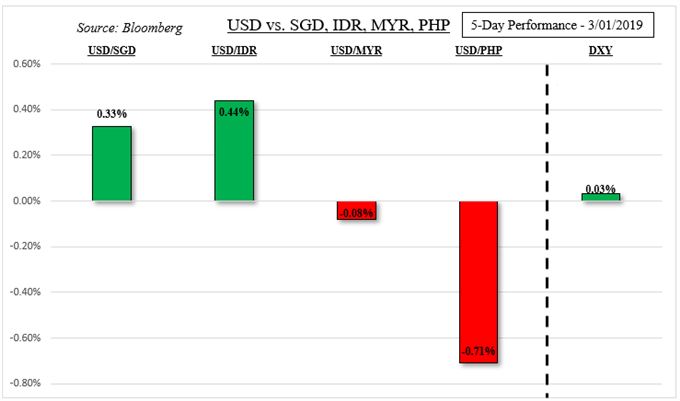 Regional equities, such as the Philippine Stock Exchange Index and the FTSE Bursa Malaysia KLCI Index, declined last week. This followed reports that MSCI will be increasing the allocation of Chinese equities in its benchmark indexes. Ahead, this could pose as a risk for domestic stocks as investors shift their portfolios into Chinese shares. Not surprisingly, the Shanghai Composite soared to its highest since June 2018. In-turn, this may weigh on sentiment-oriented ASEAN FX such as IDR.

On Tuesday, the Philippine Peso awaits February’s inflation report. Lately, the currency has been gaining ground on cooling inflation bets, thanks to lower oil prices, after CPI peaked at 6.7% y/y towards the end of 2018. Price growth is anticipated to clock in at 4.0%, down from 4.4% in January. That would be the weakest pace of CPI in one year. Crude oil prices have somewhat recovered since bottoming in December, which may slow the pace of Philippine disinflation going forward. 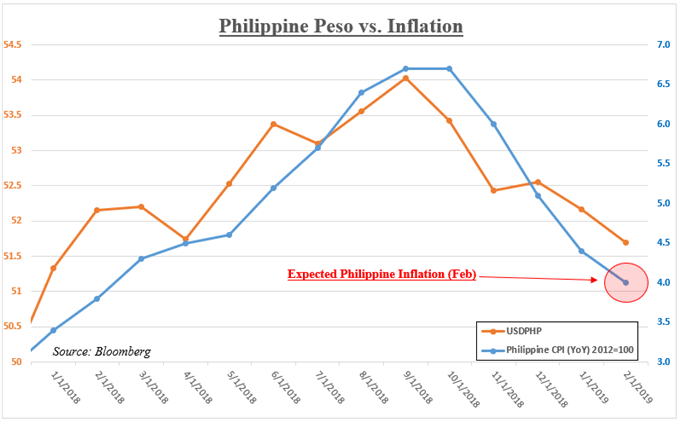 Meanwhile, the Malaysian Ringgit has a central bank rate decision to look forward to. Bank Negara Malaysia is widely anticipated to leave the overnight policy rate at 3.25%. Markets will be eyeing their forward guidance to see if they might cut rates later this year. CPI has now turned negative. But USD/MYR could fall if Palm Oil futures rise. The commodity is a key export for Malaysia and its government just announced plans to limit plantation expansion this year, impacting supply-side concerns.

Besides technical cues, which highlight reversal patterns brewing in USD/MYR and USD/IDR, ASEAN currencies could be impacted by volatility in the US Dollar. The economic docket is heavy in the world’s first-largest economy with items on tap such as a jobs report.

Aside from last week’s GDP report, economic data has been tending to increasingly underperform relative to economists’ expectations in the US. If this sours sentiment, the Greenback could catch a bid as a haven asset. Meanwhile, a deterioration in risk appetite also bodes ill for sentiment-oriented ASEAN FX.