The highly liquid US Dollar traded only slightly higher this past week amidst conflicting fundamental forces. First, sentiment improved amidst progress in US-China trade talks which sapped the demand for haven-linked assets. This likely worked against the currency. Second, increased market optimism pushed bond yields higher which worked in the greenback’s favor for those seeking a higher rate of return.

As a result, both USD/SGD and USD/MYR were little changed. But, both the Indonesian Rupiah and Philippine Peso stood out in that they achieved modest gains. USD/IDR predominantly fell on Friday following commentary from Bank of Indonesia’s Governor Perry Warjyo. He noted that he was quite pleased with the central bank’s efforts to stabilize IDR in 2018.

This likely kept driving intervention expectations, which they continue being open with to use as a tool to stem declines in the currency. Meanwhile, the Philippine Peso soared despite the weakest inflation reading since 2017. This was probably because the Philippine central bank said that it will wait until CPI averages within their price target before easing, cooling rate cut bets in the near-term. 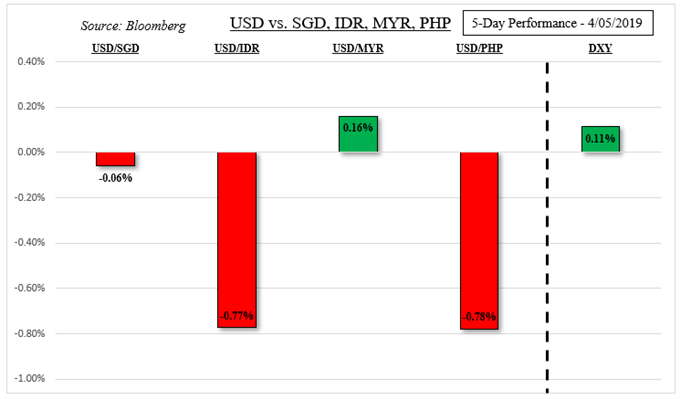 Next week, China’s March trade balance report will cross the wires. We shall see how the nation continues interacting externally amidst slowing domestic economic growth. Though with trade tensions with the US seeming to be heading in the direction of being resolved, this may inspire more confidence in investors and work in favor with a few sentiment-linked ASEAN currencies.

Meanwhile, USD/SGD may look past the first quarter Singapore GDP report. The year-on-year rate of expansion is expected to weaken to its slowest since the fourth quarter of 2015. But the nation isn’t alone in experiencing softness as the global economy slows. Still, against the US Dollar, SGD continues to hold a close positive correlation with it. This places its focus on US developments.

Speaking of, FOMC minutes and the ECB rate decision are up this week which can both drive US Dollar volatility and sentiment. Market optimism may suffer if the former reiterates the need for cautious amidst external risks such as Brexit. The latter may do the same and hurt the Euro, causing the Greenback to gain at its expense. Thus the Malaysian Ringgit may weaken as USD/MYR adds to its ascent (as expected).

The S&P 500 rallied this past week, driven by positive developments on the trade war front and this will be tested when central banks are at the front again. Meanwhile, Brexit remains a wildcard for risk trends with the withdrawal deadline approaching on April 12th. You may follow me on twitter here @ddubrovskyFX for timely updates on how these impact financial markets and ASEAN FX.