The US Dollar aimed higher this past week, rising against its ASEAN counterparts as anticipated. On a weekly basis, DXY has its best 5-day performance since early March. Gains in the Greenback occurred despite a slew of disappointing domestic economic data such as consumer confidence, GDP and Core PCE. All things considered, USD has performed remarkably well despite a dovish tilt from the Fed.

USD/IDR rose and ended the week higher, but the Bank of Indonesia is still wary of Rupiah weakness. The central bank, while announcing macroprudential policies to expand lending, also committed to conducting intervention if needed. It still sees its currency as undervalued. Meanwhile, the Malaysian Ringgit, Philippine Peso and Singapore Dollar depreciated which you can see on the chart below. 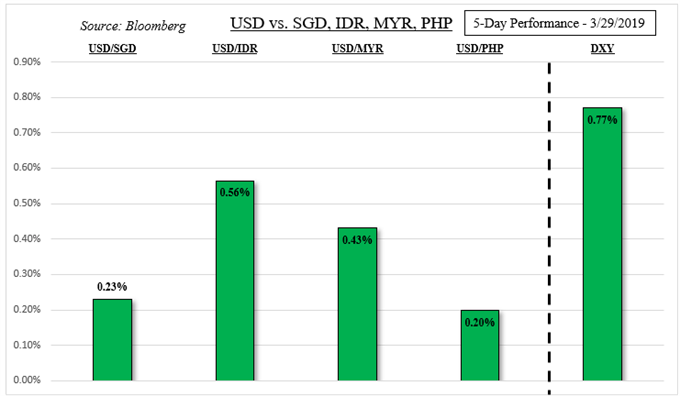 The regional ASEAN week ahead contains inflation from Indonesia and the Philippines. A softer-than-expected outcome from the former may not weigh against IDR too much if the central bank steps in to stem a selloff. As for the latter, the Philippine central bank recently pushed away from taking on accommodative policy measures for now, perhaps limiting the scope for CPI to drive USD/PHP.

Strength in the US Dollar despite softening economic data underpins the currency’s status as a safe-haven as risks to the global outlook are tilted towards the downside. Last week, a dovish RBNZ and Brexit being pushed further into limbo weighed against the New Zealand Dollar and British Pound. The Euro was also under pressure after more cautious commentary from the ECB.

Data out of the world’s largest economy is still tending to underperform relative to economists’ expectations, opening the door to a softer non-farm payrolls report ahead. Even so, the Greenback may not succumb to too much selling pressure if unpleasant statistical outcomes induce risk aversion. With that in mind, keep a close eye on the technicals for USD/SGD, USD/IDR, USD/PHP and USD/MYR.

There do remain a number of wildcards for sentiment, besides Brexit, such as US-China trade talks. Towards the end of last week, US Treasury Secretary Steven Mnuchin seemed to warm markets up for the next stage of negotiations. You may follow me on twitter here @ddubrovskyFX for timely updates on how these impact financial markets and ASEAN FX.