China’s Finance Minister, Liu Kun, said that tax cuts are a top fiscal priority this year. Economic growth in the country has slowed to its weakest pace in a decade and estimate for GDP this year were lowered. Elsewhere, South Korea’s KOSPI aimed more than 0.4% to the downside while Australia’s ASX 200 continued climbing towards August highs.

Looking at the major currencies, the pro-risk Australian and New Zealand Dollars ended up cautiously gaining. AUD/USD rose alongside a pickup in two-year government bond yields, signaling ebbing dovish RBA monetary policy expectations. Earlier in the day, Australia’s trade surplus unexpectedly rose to its highest since December 2016. This may positively contribute to growth down the road.

Over the remainder of the day, all eyes will be on the ECB rate decision. It could be the next central bank, after the BoC yesterday, to disappoint hawkish monetary policy bets (as has been the case lately with the majors). Overnight index swaps are pricing in about a 30% chance of a hike by the end of the year. If this ends up being the case, EUR/USD may fall while equities, such as the Euro Stoxx 50, could find support.

Euro Stoxx 50 futures paused the ascent from earlier this year that has led to gains of about 14.5%. Resistance stopped the index at 3337, former support from July 2018 that came into play later in August. A shooting star candle highlights indecision which often leads to a turning point. A break under the near-term rising support line from the beginning of February opens the door to testing the next one from January. 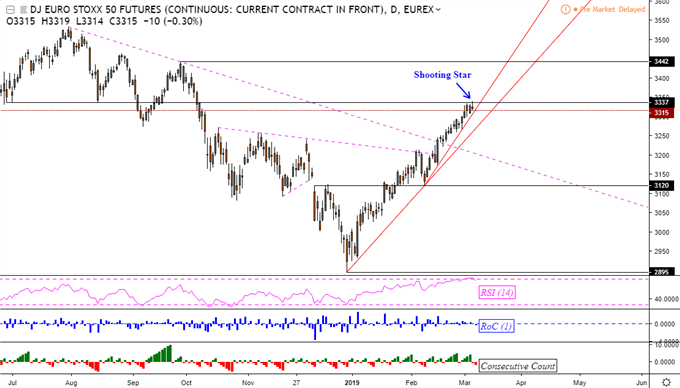