Japan’s Nikkei 225 was one of the best-performing indexes, rallying over two percent heading into the afternoon close. It is now on pace for its most impressive week since mid-February. Meanwhile, China’s state-run agency Xinhua, reported that arrangements are being made towards the next step of trade talks with the US. China’s Shanghai Composite was up over 1.6% while Australia’s ASX 200 climbed about 0.3%.

Taking a look at the major currencies, the British Pound held on to most of its gains on the Brexit developments. But a clear technical break to the upside in GBP/USD was understandably lacking given critical event risk to come. The anti-risk Japanese Yen underperformed as risk appetite likely fueled interest in carry trades. But, the pro-risk Australian Dollar was relatively neutral thanks to soft business confidence.

Arguably, the top-tier event that carries broad implications for financial markets across the world is the vote in UK Parliament on Theresa May’s revised Brexit deal later on Tuesday. The risks for Sterling are arguably now tilted to the downside, as it now has more room to trim gains should May’s divorce agreement fail to muster enough votes. The same could also be said for equities.

The FTSE 100 has been consolidating under a resistance range between 7227 and 7267. This area acted as former support back in September. Current support seems to be a boundary between 7071 and 7041. Whichever the outcome of Tuesday’s Brexit deal vote, said fundamental backdrop may inspire a break and we shall see if it will be uptrend continuation, or topping. 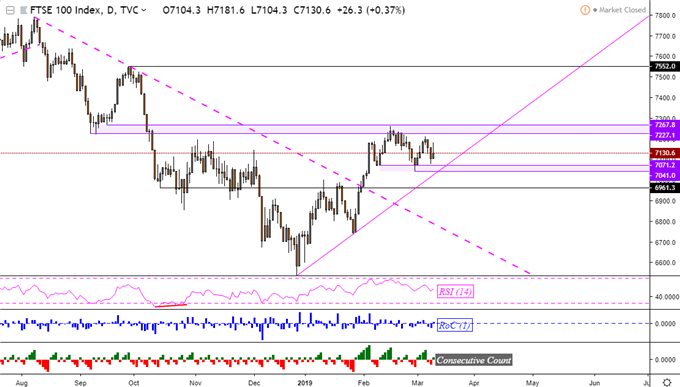