Asia Pacific equities traded cautiously lower on Tuesday, failing to find much significant follow-through after a rosy session on Wall Street. The Nikkei 225 aimed more than 0.2% lower, along with similar weakness from the Shanghai Composite. The ASX 200 was narrowly down, declining over 0.1% heading into the close while the KOSPI met a similar fate.

Taking a look at currencies reveal a similar response when considering sentiment. As one might expect, the anti-risk Japanese Yen aimed cautiously higher against its major counterparts. Meanwhile, the risk-oriented Australian and New Zealand Dollars were a little bit weaker. After a few days of gains in equities, markets appear to be experiencing a slight dose of correction ahead of this week’s Fed rate decision.

As the FOMC nears, sustainable technical breakthroughs me be hard to find in the major currencies and global indexes. It is such a high-risk event with knock-on effects that can span markets worldwide. Brexit updates do remain a wildcard for the British Pound though. Ahead, keep an eye on German and Eurozone ZEW sentiment surveys. European economic growth slowing may result in softer-than-expected outcomes.

Using futures to show after hours-trade, the Nikkei 225 is still being supported by a rising range from the beginning of this year (pink parallel lines on the chart below). Prices have attempted multiple times to breach this area since last week and it appears to be holding up. A descent through it does open the door to a turn lower, perhaps to the next immediate support area at 20973. Resistance seems to be at 21890. 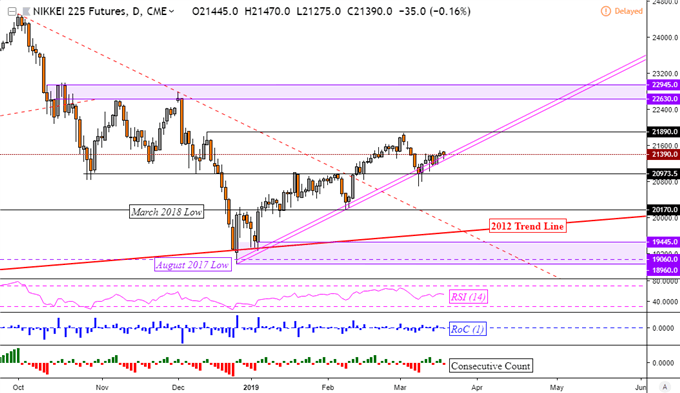