There was simply no getting away from global trade as a new week got under way in Asia. Last Friday’s news that the US will impost tariffs on Mexican imports until illegal border crossings have ceased added fuel to a fire of risk aversion already raging thanks to the long dispute between Washington and Beijing.

China’s State controlled press took a firm line once again on Sunday, accusing the US of backtracking on talks already held. The only certainty visible here is that relations will take some time to mend now, and the process has yet to begin.

This week will bring a few important regional and global economic data points which might serve to wrest market attention away from this story, however briefly. The Reserve Bank of Australia is expected to cut interest rates for the first time since August 2016 on Tuesday. The European Central Bank’s June policy call also on tap this week, as are official US labour market statistics including of course the crucial nonfarm payrolls release.

Monday’s data schedule was more spartan. A private survey of Chinese manufacturing firms beat forecasts by a whisker but engendered a rise in growth-sensitive currencies like the Australian Dollar simply on relief that expansion had continued at all. Official numbers from the same sector released last week showed it limping back into contraction after only two months of tepid recovery.

There was better news from Japan where corporate capital expenditure was revealed to have grown by 6.1% in the year’s first quarter, compared to the same period last year. Capex is a rare bright spot in the Japanese economy, holding up well despite manifest global uncertainties. Some market watchers suggest that the country’s need to refurbish old plant equipment and invest in automation and labour-saving in the face of an aging society is what lies behind investment resilience.

Still, the data weren’t enough to stop the Nikkei 225 from slipping 1.4% by the middle of the Tokyo afternoon. Shanghai and Hong Kong were both lower, having returned their early gains. With Sydney stocks lower too only the Kospi managed gains, supported as usual by its chipmaking giants.

The Tokyo benchmark has now slipped to lows not seen since mid February. 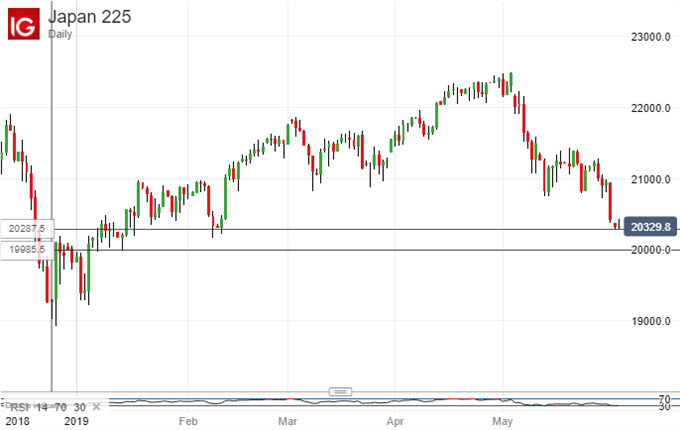 The index is now only just above a band of support from early this year, which would put what little remains of it overall rise up from the lows of late 2018 under threat.

On the foreign exchange front havens were unsurprisingly well bid. The Japanese Yen made highs not seen for four months against the US Dollar, with the Swiss Franc also doing well. Overall the greenback was only slightly lower against a basket of its most widely traded rivals. The Mexican Peso remains pressured by that sudden US tariff decision.

Market focus for the rest of the day will be on the US PMI, and other readings from the Institute for Supply Management. Canada’s manufacturing PMI is coming up too.