On Thursday, most Asia Pacific stocks fell. Equities continue struggling to achieve significant gains in the aftermath of what has arguably been the most progress made in US-China trade talks yet. Recent developments have been keeping the mood muted such as geopolitical tensions between India and Pakistan and testimony from US Trade Representative Robert Lighthizer, who poured some cold water on trade negotiations.

Japan’s Nikkei 225 declined over 0.3% heading into the close, kept down by most sectors. China’s Shanghai Composite fared roughly a similar fate. South Korea’s Kospi was one of the worst performers, falling over 0.5%. According to newswires, Trump-Kim summit talks were abruptly changed for reasons that have not been made clear yet at the time of this writing.Nikkei 225 futures aimed lower on the news.

Over the remaining 24 hours. all eyes will be on delayed US GDP. The first estimate of economic growth in the fourth quarter is expected to slow to 2.2% q/q from 3.4% in Q3. Lately, local economic data has been tending to increasingly underperform relative to economists’ expectations, opening the door to a downside surprise. If this is the case, it would underpin slowing global growth concerns.

Looking at S&P 500 futures shows multiple warning signs that a turn lower that could come ahead. Recently, prices stalled after the formation of a Shooting Star candlestick amidst fading upside momentum. In addition, a rising wedge pattern has been brewing since about the beginning of this year. This is a bearish formation that, with confirmation, can precede a descent. Otherwise, near-term resistance is between 2824.25 to 2814.00. 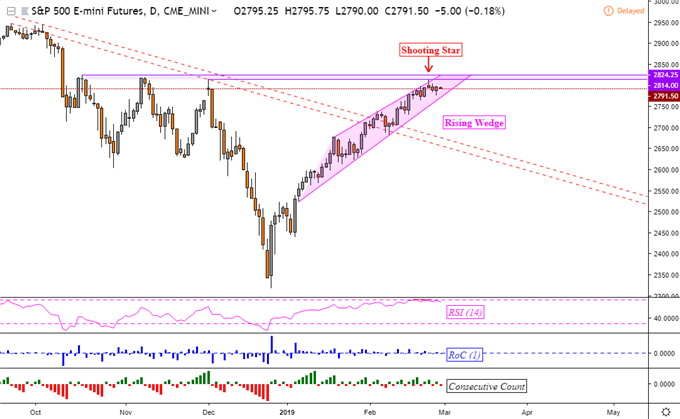