Asian stocks made broad gains on Monday thanks to news of a surprise expansion in Chinese manufacturing activity.

That sector’s official Purchasing Managers Index clawed back into growth territory in March according to data released on Sunday, ending three straight months of contraction. The PMI came in at 50.5, just over the key 50.0 line which separates growth from reduction. Monday brought the private, Caixin version of the survey. It also surprised to the upside, coming at 50.8 when the markets had looked for another sub-50 reading.

PMI data from Japan and the Assocition of Southeast Asian Nations (ASEAN) also perked up. However, the news wasn’t all good. Expansion was modest, export components speak to still-weak global demand and Japan’s Tankan business survey was almost unremittingly downbeat.

Still, investors seem happy to stick with the positives. The Shanghai Composite lead the charge higher, adding 2.4%, The Nikkei 225 was up 1.4% and the Hang Seng added 1.6%. Australia’s ASX 200 was a laggard but still rose by 0.6%. India’s Sensex benchmark made a new record high on Monday, touching 39,017, buoyed up by hopes of a domestic interest rate cut.

A general risk-appetite revival saw the Japanese Yen lose more ground to the US Dollar even as the greenback was pressured anew by the likes of the Australian Dollar. AUD/USD remains firmly within the downtrend channel which has held sway since early 2018. 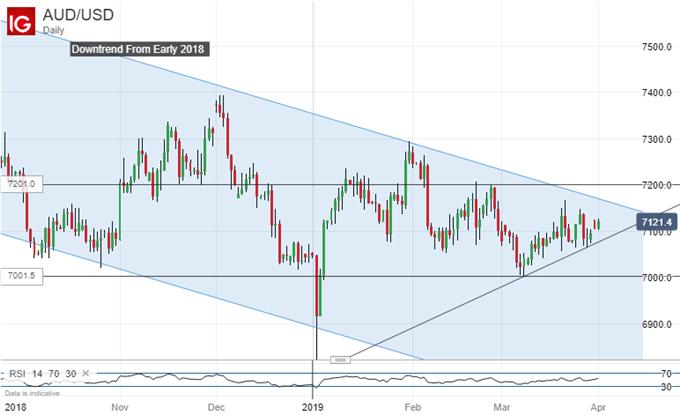 However, within that, the Aussie has embarked on a modest but clear uptrend since early March which could take it back to that channel top if it can get up to the 0.7157 region and hold there on a daily or weekly basis.

Gold prices edged higher as the Asian session progressed. DailyFX Senior Currency Strategist Ilya Spivak suggests that the spot could be topping out in a process that could put $1200/ounce level back in bearish focus.

Still to come Monday are various PMI releases from the US and around Europe. Official US retail sales figures for February will probably be the day’s data headliner though. Construction spending and business inventory numbers are also coming.