The February Purchasing Managers’ Index for private-sector concerns from local media group Caixin showed that activity shrank for a third straight month. This was hardly unexpected, however, after Thursday’s release of the official PMI which told the same story.

There was better news for China from global index provider MSCI. It said it would quadruple mainland Chinese stocks’ weighting in the benchmarks to 20% from 4%, potentially drawing in huge new international investment.

Trade-deal hopes were kept alive by White House economic adviser Larry Kudlow who told financial news channel CNBC he thought the US and China were headed for a ‘remarkable, historic deal.’ Stronger than expected US GDP growth may also have helped sentiment in Asia, where the Nikkei 225 was up 1.2% as its weekly close approached. Shanghai was up by 0.2% with Hong Kong’s Hang Seng rising by 0.4%. The ASX 200 gained a similar amount while South Korea’s Kospi sank by 1.9% after a disappointing end to Thursday’s meeting between US President Donald Trump and North Korea’s Kim Jong un.

The US Dollar hit ten-week highs against the Japanese Yen on Friday, lifted by those US growth data. It was higher against all its other major traded rivals too. Indeed, USD/JPY is challenging the top of an uptrend channel which has held for much of this year. 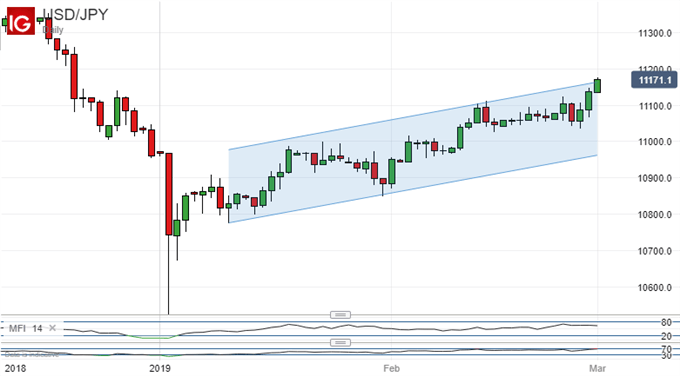 It will be instructive to see whether the Dollar can remain above this level on a weekly closing basis. If it can it will have clawed back more than 50% of the sharp falls seen between mid-December last year and early January.

Asia’s Friday is winding down, but the global economic calendar remains pretty packed. German retail sales, unemployment data and Eurozone inflation numbers will top the European bill, along with various Purchasing Managers Indexes. Canadian Gross Domestic Product figures are due, as is the US personal income and spending release. The US PMI is coming up as well, along with February’s snapshot from the Institute for Supply Management. The University of Michigan’s monthly look at consumer sentiment will round out the global session,