Asia Pacific stock markets were resilient across the board Wednesday despite plentiful bad news on both the corporate and economic fronts.

Japanese automaker Nissan Motor’s shares were hammered after the company posted disappointing fiscal 2018 earnings. These came in at an eleven-year low, with profits below that of French partner Renault. Sticking with the theme of disappointment, China’s official industrial production and retail sales figures came in below forecasts too.

Despite all that, regional mainboards were all in the green as their closes approached. Wall Street gains in the previous session added some strong support. Investors detected some less-bellicose rhetoric from both Washington and Beijing on trade. Donald Trump referred to recent tensions as a ‘little squabble’ and the Chinese Foreign Ministry spokesmen said that relevant discussions would continue.

The Japanese stock benchmark remains well below the uptrend channel which contained much of this year’s trade. 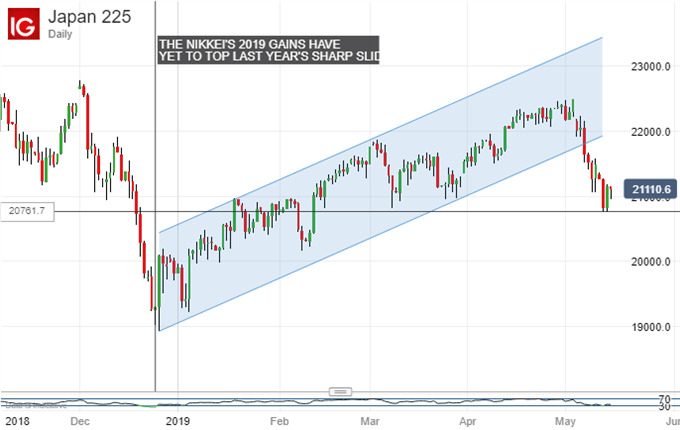 For the moment support from mid-January is holding the bears in check at its most recent lows.

The US Dollar was steady overall in Asian trade, with the growth-sensitive Australian Dollar failing to capitalize on apparently revived risk appetite. AUD/USD continues to hover near four-month lows.

There’s plenty of economic life left in Wednesday’s economic calendar. Eurozone growth figures are coming up, as is news of Canadian consumer prices. Both are certain to draw plenty of attention, but the day’s main event will be advance US retail sales numbers for April.