Asia Pacific stock markets put in a mixed performance to end their trading week, with the approach of important US employment data keeping a lid on risk appetite, as it often does.

Mainland China and Hong Kong were out for a holiday, but the better Wall Street risk appetite engendered by some hopeful commentary around the possible delay of US tariffs on Mexico rubbed off on the Nikkei 225 and Australia’s ASX.

Thursday’s news that the European Central Bank will delay its first post-crisis interest rate rise until at least the middle of next year also gave stock markets a boost. Investors seem far from certain that a hike will really come even then though.

The Nikkei added 0.6% with robot-maker Fanuc gaining nicely as focus grows on automated goods-handling systems. The ASX 200 was up 0.6% with Seoul’s Kospi up by 0.3%.

Nikkei bulls are making a fight of it but the benchmark remains just below its short-term downtrend line. 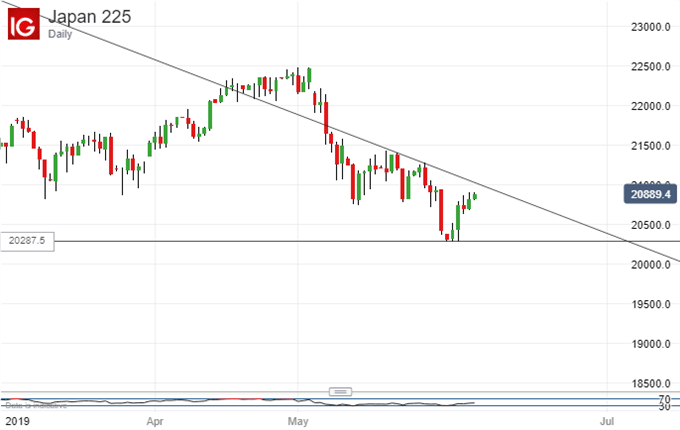 Unless that line can be topped the danger of a bearish ‘lower low’ will still threaten and may continue to do so even if it can.

Friday’s session will bring news of US nonfarm payroll growth for May. A rise of 175,000 is expected. That result would be significantly below April’s 236,00 rise and in any case may be overly optimistic now given that the ADP National Employment Report already released shoed the weakest monthly private-sector hiring gain in more than nine years, 27,000.

The US Dollar remained under pressure against a basket of its major traded peers, with suspicions growing that a weak payroll figure might set the seal on lower US interest rates, possibly as soon as July. The Australian and New Zealand Dollars drifted as investors looked to those job numbers.