The S&P 500 managed its first gain in three days, with ten-year US Treasury yields bouncing modestly off its lows. Even so the bellwether Nikkei 225 was down 0.4%, but the Shanghai Composite and Hang Seng added 0.4% apiece by the middle of their afternoon. The ASX 200 faded, to be down 0.1%.

China market resilience came in the face of data showing the weakest slide in domestic industrial profits since late 2011. Profits slipped 14% on the year in the January-February period. Still China’s Beige Book survey did show a pickup in activity, albeit with a big rise in debt.

The US Dollar made gains as investors looked to the Treasury market. The New Zealand Dollar wilted as its reserve bank left interest rates alone at record lows once more but hinted that they could yet go lower. This was a modest adjustment to its previous neutral bias.

Having held up reasonably well through the risk-appetite slips of recent weeks, NZD/USD has now retraced some of its gains. 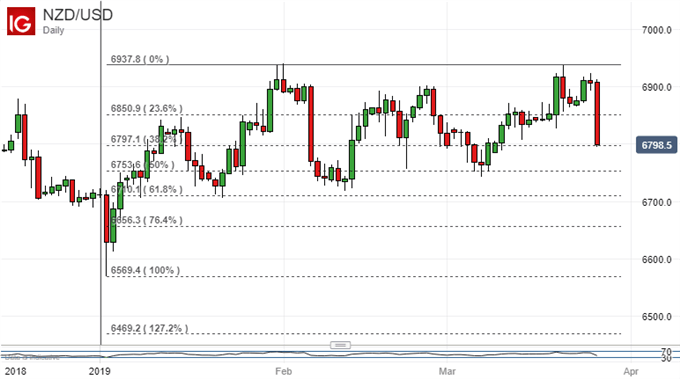 For the moment the second Fibonnaci retracement of its 2019 rise seems to be holding. It comes in around 0.6797. However, the psychological 0.7000 point now looks like a most formidable barrier for the bulls.

Gold prices made initial gains as local stock market started soft but were modestly lower by the end of the day. Crude oil prices went the other way, having faded early on news of a US inventory gain only to rise through the session. Still, demand worries continue to cap this market.

Wednesday’s remaining economic data schedule is a little sparse with only official US crude-oil inventory data likely to whet the markets’ appetite. There are plentiful European Central Bank speakers on tap, too. Vice President Luis De Guindos is on the roster as are Executive Board members Sabine Lautenschlager and Yves Mersch.