Asian stock markets endured a mixed Monday despite Wall Street’s bout of strength at the end of last week following better-than-expected US growth figures and some punch earnings reports.

The region was without usual bellwether Japan, with markets there closed until May 6 in a holiday break which sees the traditional ‘Golden Week’ celebration augmented by further days off to mark the abdication of Emperor Akahito which will take place on Tuesday.

Hong Kong’s Hang Seng caught the US tailwind and rose 0.7% as its close approached. Mainland markets struggled, with Shanghai down 0.1%- analysts are reportedly getting a little worried about stretched valuations there. Australia’s ASX 200 retreated modestly from last week’s eleven-year highs but seems to be largely retaining its composure into a week which will see the release of important domestic bank results.

Currency markets were even more obviously becalmed without Tokyo. Regional traders seemed highly reluctant to push matters too far without that city’s participation, especially during a week which will offer a monetary policy decision from the Federal Reserve and important US labor market statistics. The US Dollar was barely changed against a basket of major traded rivals.

USD/JPY remains, just, within the daily chart range derived from its former previous peaks, those of late February and early March. 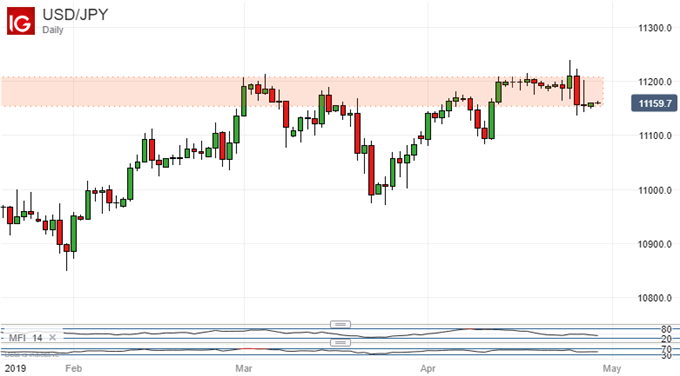 This pair is likely to be especially volatile until Japanese markets return to full-steam, and appears to be in the process of retesting that range base.

Crude oil prices slipped back after a Tweet from Donald Trump urging OPEC to increase production and offset the effects of sanctions against Iran. Gold prices. Gold prices rose to one week-highs last week on signs of softer US inflation but retreated a little through the Asian session.

Monday’s main scheduled economic data event is still to come in the form of March personal consumption and expenditure figures out of the US but they’re note quite alone on the schedule. The Dallas Federal Reserve’s manufacturing snapshot is also coming up, and the markets will also hear from Bank of England Governor Mark Carney. He’s due to speak in London.