Asia Pacific stocks were mostly lower Wednesday with news that China’s inflation had hit 15-month peaks weighing on indexes there.

Consumer Prices’ rise was not unexpected but worries that Beijing will withdraw stimulus if prices they continue to gain is a well-worn worry. The data weighed on markets already slipping thanks to Wednesday’s Wall Street session which saw winning streaks snapped for Dow and Nasdaq.

The Nikkei 225 was down by 0.6%, with the Hang Seng off by 1.7%. Protests in Hong Kong against the application of Chinese extradition laws were ongoing. The Nikkei 225 managed very marginal gains despite falls for heavyweight soft bank. The ASX 200 added 0.2%, with rises in iron ore prices helping the mining sector.

Australia’s equity benchmark remains well within the uptrend channel which has dominated trade since February, however, and is still attempting to test the upper boundary on its daily chart. 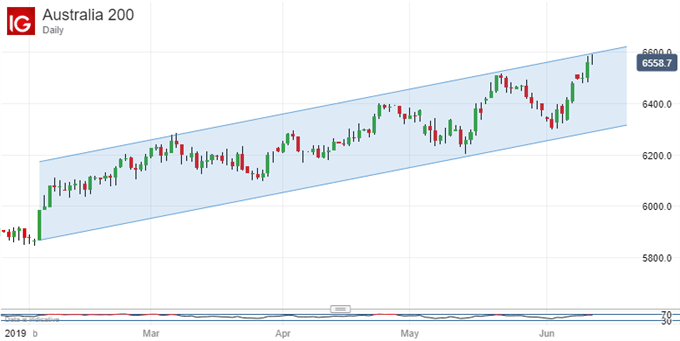 The index is not very far from a retest of its record peaks but in the current atmosphere of volatile risk appetite the climb may be a more arduous affair than its bare 300 points or so might suggest.

The US Dollar was barely moved against a basket of its major traded peers although market suspicions that lower US interest rates could be coming very soon continue to cap the market. The Chicago Mercantile Exchange’s ‘Fedwatch’ measure puts the chance of a rate cut in July close to 70%. The remainder of Wednesday’s session will bring official US Consumer Price Index figures which are expected to show a modest deceleration in pricing power for May.

The Australian Dollar slipped a little too. Domestic consumer confidence was found to have wilted this month with optimists only now outnumbering pessimists by a whisker in Westpac’s regular survey.