Those yields can act as a gauge of investor confidence, with acceptance of lower levels usually a sign that there is not much around. The benchmark ten-year T-bond’s yield hit its lowest point since late 2017 on Wednesday in the US.

In the currency market the US Dollar defied what would usually be the deadening effect of lower yields to rise modestly against a basket of its major traded rivals. There may well be some suspicion that, while there will be more monetary caution ahead in the US, there’ll be plenty around elsewhere too. The Reserve Bank of New Zealand certainly seemed more dovish this week. The New Zealand Dollar was knocked again on Wednesday by yet more weak business confidence numbers out of its home country.

The Japanese Yen has been predictably strengthened by demand for perceived haven assets. USD/JPY has slipped back and is now once again eyeing last week’s lows. 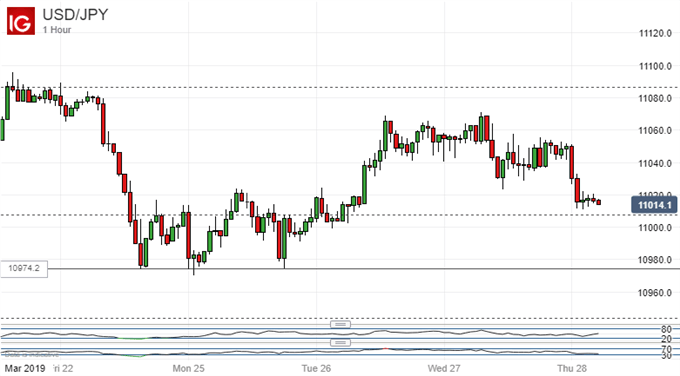 Gold prices steadied themselves after recent falls and went nowhere much through the Asian session. Crude oil prices meanwhile continued to chafe under news of elevated US stock levels.

The second revision of official US Gross Domestic Product figures for the old year’s last quarte will top the remainder of Thursday’s economic bill. They’ll be supported by pending home sales numbers and German inflation figures. Continuing and initial jobless claims data from the US are due too. European Central Bank Vice President Luis De Guindos will speak in Frankfurt.