Asia Pacific stocks were mostly lower Wednesday as new uncertainties over trade between the US and China tempered risk appetite.

Much of these seem to have their roots in a Bloomberg article which reported that US authorities are worried China may be pushing back against their demands. Chinese negotiators meanwhile are reportedly concerned for their part that they have not received any assurances that tariffs recently imposed would be lifted if a deal were struck.

Sure enough the Shanghai Composite was down 1% in the middle of its afternoon session. The Hang Seng had slipped 0.5% and the ASX 200 0.3%. The Nikkei 225 was in the green but only just.

The markets are also focused of course on this month’s monetary policy meeting of the Federal Reserve which will give its decision on Wednesday (early Thursday Asia Pacific time). A degree of dovishness is expected from the US central bank, with perhaps fewer rate increases expected this year.

Even so the US Dollar was generally stronger through the session as those trade worries prompted a haven bid for the currency. That bid wasn’t universal by any means however. Gold prices slipped on that stronger greenback,

USD/JPY remained within the daily-chart uptrend which has characterized trade for most of this year. 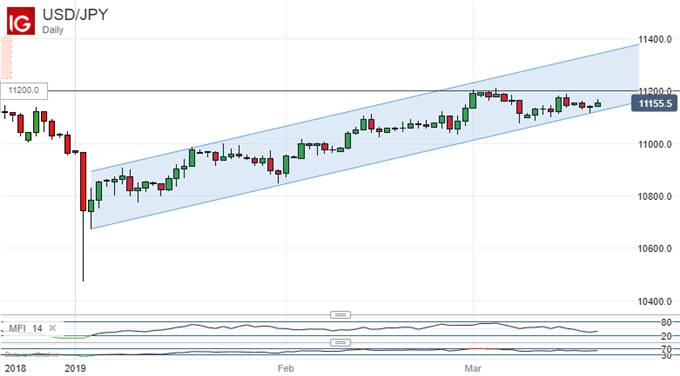 The key psychological resistance level of JPY112 remains too much for this market on a daily-closing basis however, and the bulls need to press their case soon or risk a slip back below that downtrend line.