Asia Pacific stocks were always likely to face a tricky Friday after Wall Street’s swoon in the previous session on disappointing earnings and so it proved.

Most regional mainboards were lower as their week’s close loomed with the Nikkei 225 weighed down by falls for Softbank and, perhaps more pressingly Nintendo which came out with guidance described as extremely conservative. The Tokyo benchmark slipped 0.7% with the Shanghai Composite down by 0.8%. The ASX 200 fell 0.1% with the Hang Seng the only notable gainer and even that only up by 0.1%.

The US Dollar was steady close to two-year peaks against a basket of its major traded rivals. Thursday’s data showed strong gains for US-made capital goods, on the heels of stronger retail sales and export numbers.

That said USD/JPY seems to be heading for a break below the narrow trading range which derived from the previous significant peaks- those of early March. 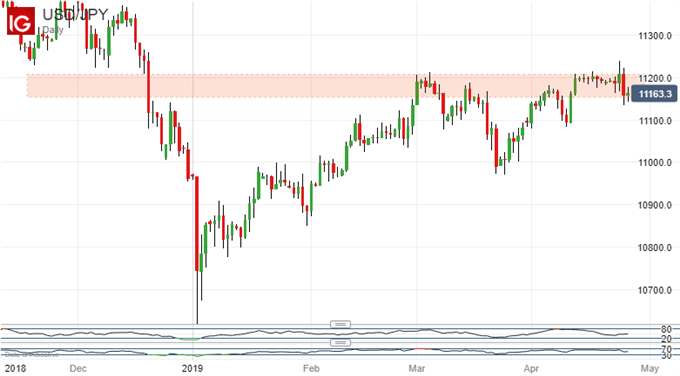 If that range base does give way then likely immediate support may come in at April 11’s low of 110.90.

First quarter Gross Domestic Product numbers out of the US will come later Friday. They are expected to show that the world’s largest economy continues to outperform most developed rivals with a 2.2% annualized gain expected.

Gold prices edged back up as general risk appetite fell away and growth worries began to take control again. Crude oil prices fell back too, reportedly on suspicions that traditional producers including OPEC will increase production.

Still to come Friday is of course that US growth data but it’s not quite alone on the schedule even though it’s clearly the top act. UK home-loans data and the University of Michigan’s consumer sentiment index will play supporting roles.