The Australian benchmark has done well so far this year in any case, despite a macro backdrop which might seem tailor-made to scupper it. After all, the defining feature of the world economy has been a trade impasse between the US and China. Australia has broad economic and political links with both. Indeed it’s arguably the third nation most in need of a durable deal.

Still, the ASX has risen nicely on a combination of other factors. One is the very weakness of the Australian Dollar brought about by that trade-related slide in risk appetite. Aussie stocks have looked quite welcoming to offshore investors. Then there are iron ore prices. Supply difficulties elsewhere have seen Australia’s top commodity export in greater demand.

So, if the index can thrive in times of reduced risk appetite, what might it do if things pick up?

That weak US payroll number last week has probably made any more US rate rises in the medium term extremely unlikely. The most recent commentary from Federal Reserve speakers has markets on alert, expectant that the central bank will act to support asset prices. Since the financial crisis the prospect of lower US rates has acted like a magic bullet for risk appetite, whether it should or not. Ample Dollar liquidity remains for better or worse the most reassuring sight most investors can imagine.

Growth-Linked Stocks Could Be Back In Demand

The ASX may yet see a clear rotation out of the defensive stocks which have done well up to now- utility names and real estate investment trusts- and into firms more leveraged to the global cycle. Think miners of course, but also builders and retailers. Don’t forget that this isn’t all about the Fed. Australian interest rates have just been cut to a new record low and could yet go down again, even if the market is overestimating the chances of really deep cuts.

So, back to those record highs which is where we came in. The ASX scaled them in the hopeful days of November 2007. Yes, that was shortly before the world started Googling the term ‘subprime.’ Back then the index hit 6842. That’s a little over 300 points above the current market. The record is not under immediate threat. But it is well within range of any likely Fed-inspired worldwide bump, especially if it comes with signs of trade rapprochement between Washington and Beijing.

Technically speaking the ASX remains well within the daily chart uptrend which has endured solidly since February and which is in any case only a continuation of the rise up from late January’s lows. 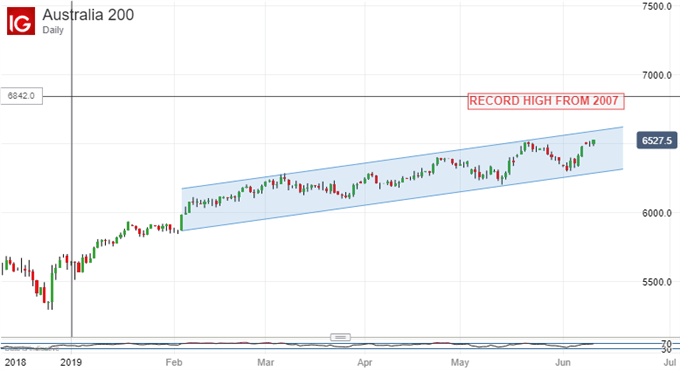 Trade seems to have carved out a new higher-high this week already, but a strident upside test of that upward channel top would be a strong statement of current bearish intent. The channel has seen fairly frequent tests of its upper reaches and a new one would need to take on and top the 6595 region.

The daily chart looks for once like a true microcosm of the monthly and its’ when you look at the strength of the uptrend on the latter that the proximity to that record peak becomes really apparent. 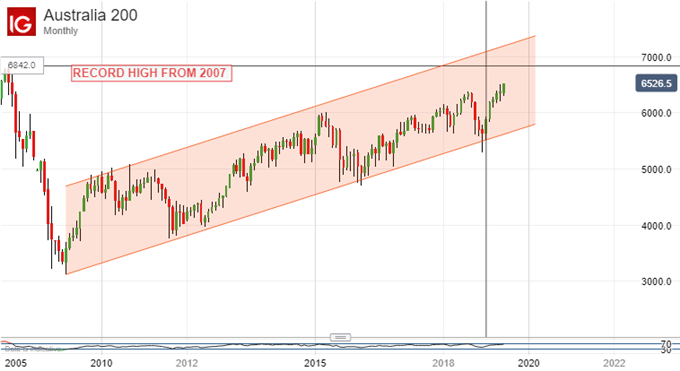 Of course, these are very news-driven markets, often only one Presidential Tweet away from reversal, so there can be no guarantees. But the ASX looks very likely to prosper further if global liquidity eases up.