The ASX 200 has risen the recent bout of resilient risk aversion perhaps as well as any other index, rising up last week through its previous trading range to peaks we’ve not seen since November 2007.

Moreover, the Australian stock benchmark has not so far retreated very much from those dizzy heights since. That indicates what for the bulls must be a reassuring degree of comfort both with current altitudes and with a distance of nearly 400 points from the 6000 mark which has often proved so psychologically crucial to the index in the past.

That said the coming week’s action may well have fundamental roots, with many of Australia’s big banks set to release interim results. National Australia Bank, Macquarie and the Australia and New Zealand Bank are all due to publish. Financials make up the largest single sector of the index and local lenders have had to contend with both lower interest rates, conduct inquiries tougher capital requirements. Those results may not set the index on fire.

Indeed, the wait for them is probably what has seen progress halt at those still-impressive eleven-year peaks. 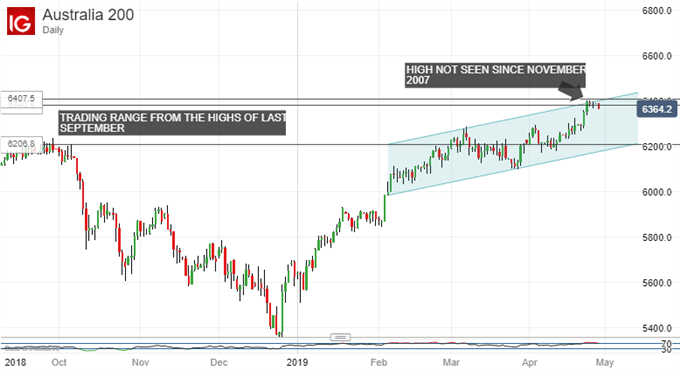 Now that old trading range between 6407.5 and 6208.8 comes back into play as near-term support and, if it can hold through this week, then the bulls may well consider themselves still in the driving seat.

That being so their next order of business will be measurable consolidation above the range, with their sights probably set on 2007’s overall peaks just above 6,800. This will be a region to which visits have been fleeting in the memory of most market participants, however, and risk appetite will have to be hearty indeed to endure progress much beyond this mark.

The index remains very much within durable uptrend channels on both its daily and monthly charts, however, so while these are unthreatened more progress seems likely. Within the channel support is likely in the 7278 region where trade concentrated between April 1 and 24, with overall channel support coming in at 6178, a good way below the market.

Obviously if this were to break then the medium term bullish case would be under more serious threat, but it looks solid enough for now. If the index can hold up through this week’s bank earnings then there is probably more juice left in the current rally, impressive though it has already been,