Australia’s ASX 200 was the standout gainer Wednesday in what was elsewhere a patchy day for Asia Pacific stocks. Most got an initial tailwind from a strong Wall Street Tuesday, rooted in record closing highs for the Nasdaq and the S&P 500 in the face of crowd-pleasing corporate earnings,

Most regional mainboards retraced their gains as the session wore on but the ASX was propped up by much weaker than expected Australian inflation readings which raised hopes that record-low Australian interest rates could yet go lower still.

The ASX added 0.9%, but the Nikkei 225 was off by 0.5% as its close loomed, with Shanghai down 0.9%. Trade was back to the forefront thanks to reports that US Trade Representative Robert Lighthizer and Secretary of the Treasury Stephen Mnuchin will be heading back to Beijing for more talks on April 30.

AUD/USD has slipped back into the pervasive downtrend channel which marked most of 2018’s trade. 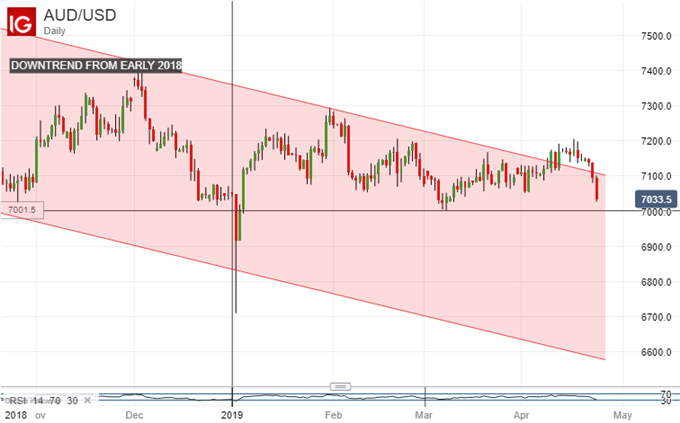 The lows of early March are coming back into play, with January’s significant lows awaiting should they give way. The US Dollar meanwhile powered up to 22-month peaks against a basket of its major traded rivals, boosted by equities’ vigor and more strong economic data this time in the form of new-home sales.

Crude oil prices dipped back from this week’s highs even as investors continued to mull the likely effects of intensifying US sanctions against major producer Iran. Gold prices headed lower too as haven assets were broadly shunned.

Still to come Wednesday is Germany’s Ifo business sentiment survey, UK public finance data and the Bank of Canada’s April monetary policy call. Canadian base rates are expected to stay put at 1.75%. From the US will come official crude oil inventory levels from the Department of Energy.