The Australian stock benchmark defied trade-gloom and diminished global risk appetite quite well up until the end of last week. Rising iron ore prices and a weaker Australian Dollar burnished the appeal of what should probably have been among the hardest hit indexes of all given Australia’s clear links to both China and the US.

Still, despite some fundamental resilience, I suggested last week that the index may well be tiring, and so it seems to have proven since. Admittedly the index remains just within the uptrend channel which has bounded trade since February 4. However, its slide toward the channel base has accelerated sharply since April 22 and a test now seems likely, possibly quite soon. 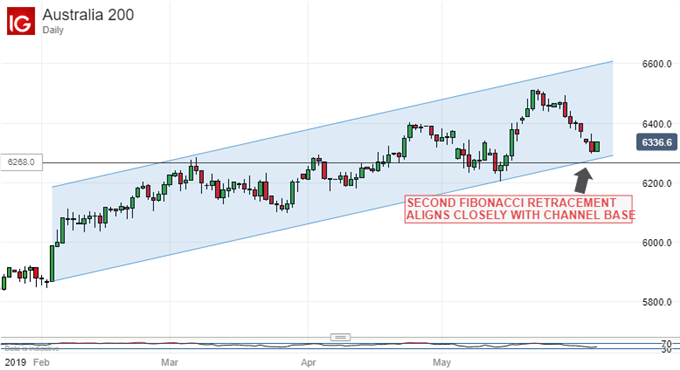 Moreover, this base takes the lows of May 14 into account. Indeed, they constitute its only confirmation since the channel began. Its plausible to view those as quite spurious for these purposes and, if we do, then the index is probably already below any uptrend which ignores them.

Even so the bulls may yet have something to play for if they can hold the current line, and it will be instructive to see how much support if any the channel base at 6271 can provide. Bear in mind that the first Fibonacci retracement of the rise as a whole has already given way. It was at 6362.5 and fell on Friday of last week. Focus is now on the second retracement, 38.2%, which comes in within a few points of the channel base at 6268.

Should that to be surrendered on a daily and weekly closing basis then the uptrend overall would be clearly in trouble and immediate focus would then probably fall on a band of support between 6235 (May 15’s low) and 6094 (the low of March 27). In turn trade in this area would bring the psychologically crucial 6000 point perhaps uncomfortably close, and investors should probably be wary in that case of a quick fall below it, possibly followed by further falls.

The bulls are going to have to try to form a base around current levels if they’re going to have another try at recent highs. However, the index is not at this point oversold and the fundamental picture doesn’t make this look very likely.

The index might get some fundamental support from the looser monetary policy overwhelmingly expected from the Reserve Bank of Australia later Tuesday, but against the global backdrop this could be quite fleeting.