The Australian Dollar slipped a little Monday on a plethora of weaker domestic data of which the lowlight was probably surprise softness in company operating profit.

Profits rose just 0.8% on the quarter to December 2018, well below the 3% increase expected and the previous quarter’s 1.2 % rise (revised down from the initially reported gain of 1.9%). Inventories also fell, by 0.2%, when a 0.3% gain was forecast. These numbers followed news of a fall in job advertisements as counted by Australia and New Zealand Bank. Adds Ads fell 0.7% on the month in February. It should be noted however that the labor market remains extremely robust, according to the most recent official figures.

Monthly inflation was found to be running at 1.6%, still well under the 2-3% band targeted by the Reserve Bank of Australia.

All up this was a weak set of numbers but, thanks largely to the RBA’s recent forecast cuts, the market was probably already focused on a tougher 2019, reducing the relevance of last year’s profit figures.

AUD/USD edged down following the figures but is likely more in thrall to general market risk appetite as a new week gets under way. 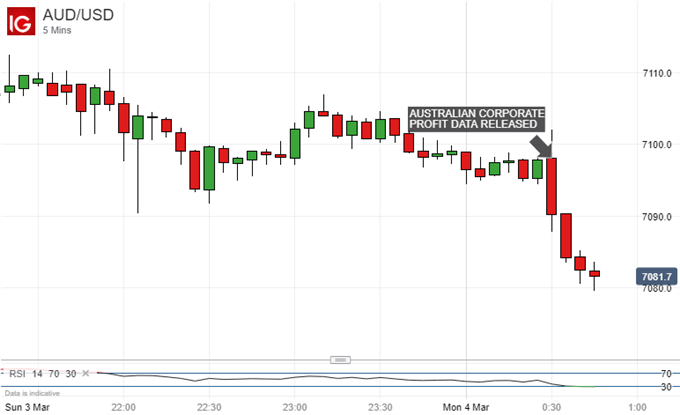 On its daily chart, AUD/USD remains trapped in the broad range which has endured since early January, above the formerly pervasive downtrend channel which characterized much of 2018’s trade. Back then the Aussie was a victim of the prognosis that US interest rates would continue to rise while the Australian Official Cash Rate remained stuck at its 1.50% record low.

This year the currency has gained as investors have looked to a more cautious Federal Reserve and as risk appetite has held up in the face of encouraging noises about a possible trade settlement between the US and China.

However, the Aussie has been hit by the Reserve Bank of Australia’s admission last month that domestic rates could yet go lower, and also by its significant cut to growth and inflation assumptions. 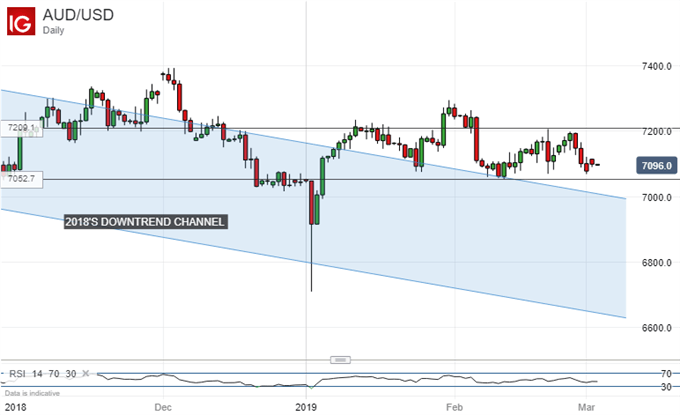 For the moment that range is holding but the pair has traced a series of lower highs dating back to late September. While a broad US/China deal represents a significant bullish risk, the Australian Dollar completely lacks interest rate support, with markets now pricing in a cut by the end of next year. This will tend to bias the pair toward the downside, as the trading action shows.

The RBA will give its March monetary policy decision on Tuesday. There is held to be virtually no chance whatever of an interest-rate move, but the central bank’s statement will as ever command attention. Based on recent commentary it is likely to be on the dovish side and therefore probably unwelcome for Aussie bulls.