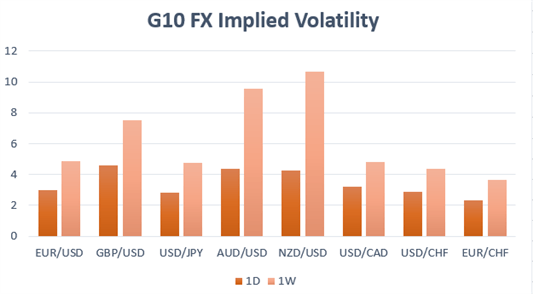 Australian Dollar 1-week implied volatility surged to the highest level since January ahead of the RBA rate decision, in which investors have shown a greater interest for Australian Dollar puts over calls (greater demand for downside protection). AUD traders will be firmly fixed on the RBA rate decision in which soft inflation (full story) has stoked expectations of an imminent rate cut with OIS markets pricing in a 40% chance of a 25bps cut at the upcoming meeting, while economists are split 50/50 as to whether the central bank will cut now or signal a cut for a later meeting.

However, despite inflation dropping to the lowest level since Q3 2016, the labour market remains strong. As a reminder, at the last meeting the RBA stated that a rate cut could be needed if unemployment rises and inflation remains weak. Given that we have only seen the latter take effect, this may be enough to push back a rate cut. Regardless, this meeting is very much a “live” one. 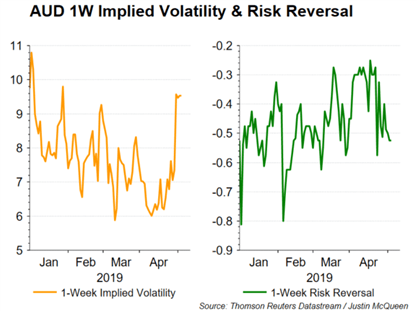 Much like the Aussie, the New Zealand Dollar has been under pressure in recent sessions as expectations of a rate cut weighs on the currency. Weakening domestic data, most notably, inflation, has seen OIS markets price in a 60% chance of a 25bps cut at the RBNZ’s May 8th meeting. Consequently, 1-week options, which captures the event has seen implied volatility jump to its highest level in over year, whereby investors are seeking NZD put options for protection against deeper losses. 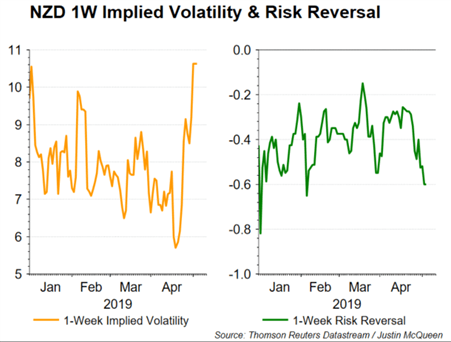