The Australian Dollar fell against all of its major counterparts following the release of several weak local CPI publications while domestic bond yields fell almost seven percent. Year-on-year headline inflation came in at 1.3 percent, the softest outcome since the third quarter of 2016. Quarter-on-quarter data showed similar weakness, clocking in at 0.0 percent, the softest outcome in three years. 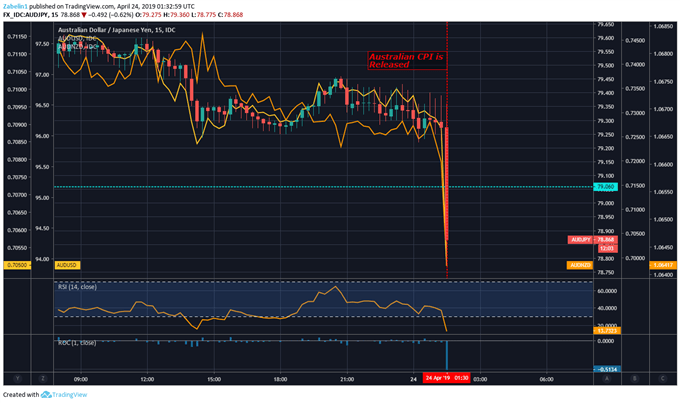 Considering economic indicators have been tending to outperform relative to economists’ expectations, the disappointing data fell out of line with the broader uptrend in economic performance. The weaker inflationary data may prompt the RBA to tilt towards more of a cut than a hike. Overnight index swaps are currently showing an 86.7 percent probability of a cut by November.

Policymakers have become increasingly worried with slower global growth and the status of US-China trade relations. “Downside risks to the global outlook have increased” as stated in the monetary policy statement of February. A similar message was echoed in the RBA meeting minutes released earlier this month which sent the Aussie and Australian bond yields lower amid expectations of a dovish shift.

Looking ahead, the Australian Dollar will be eyeing the upcoming meeting in Beijing between Chinese officials and US Trade Representative Robert Lighthizer and Treasury Secretary Steve Mnuchin. This will be followed be a visit with Vice Premier Liu He who will lead a Chinese delegation to Washington on May 8. While the US-China trade war looks like it is coming to an end, fears over slower global growth may weigh on the Aussie along with concerns over another US-led trade war. This time, with Europe and possibly Japan.