Have a question about what’s in store for Australian Dollar next week? Join aTrading Q&A Webinarto ask it live!

The Australian Dollar traded sideways against its US counterpart this past week, holding within a critical psychological area on the chart below. AUD/USD is sitting at support between 0.6982 and 0.7012, or in other words right above the daily close seen in early 2019 during the ‘flash crash’. This leaves the Aussie Dollar ultimately little changed since January.

AUD has also been subdued by the falling trend line from late January (blue-dashed line below). Just above it sits former support-turned-resistance at 0.7057. Positive RSI divergence shows fading downside momentum, and this may precede a turn higher. Otherwise, clearing support exposes August 2015 lows. 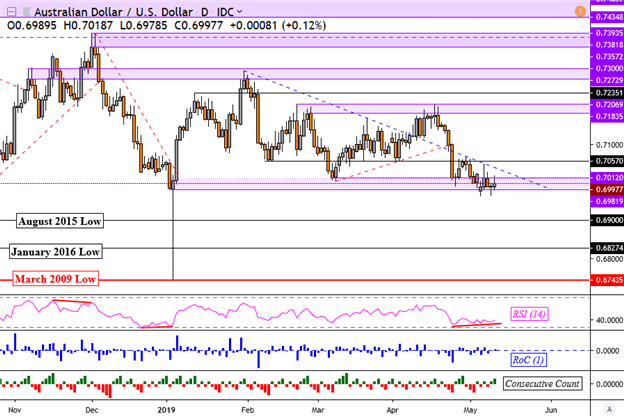 The focus in markets on trade wars again is raising interest in the anti-risk Japanese Yen. AUD/JPY thus finds itself in a rather narrow descending channel, having just recently cleared key support at 77.49 via a gap lower at the beginning of last week. In the medium-term, losses in AUD/JPY followed the break under the near-term rising support line from late March.

This has ultimately exposed the ‘flash crash’ lows here as well around 75.24. If the channel holds, we may see a steady descent towards that level, eventually exposing lows not seen since 2011 and 2010. Otherwise, breaking above the channel ceiling, with confirmation, opens the door to a bullish reversal back to 79.84. 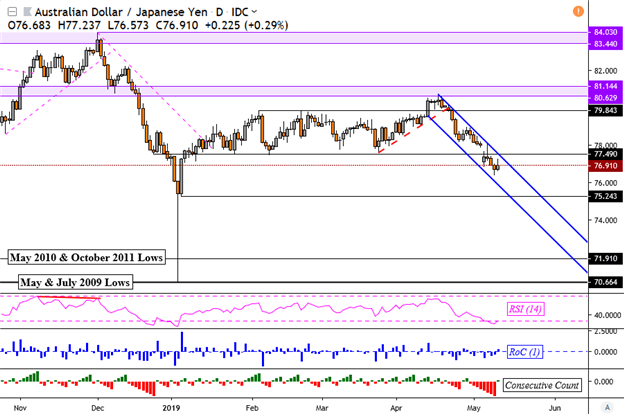 GBP/AUD was also a notable underperformer this past week after failing to top the highs in March at 1.8863. This has left behind it a potential Double Top bearish reversal pattern that appears to be brewing. The additional closes to the downside last week could be seen as confirmation, opening the door to testing what could be a potential trend line marked on the chart below.

Around that same area is former resistance that may turn into support around 1.8434. If breached, that will expose the April lows between 1.8100 and 1.8152. For more updates on the Australian Dollar and for important technical moves in other Aussie-crosses, you can follow me on twitter here @ddubrovskyFX where I will also be watching out for prominent fundamental developments. 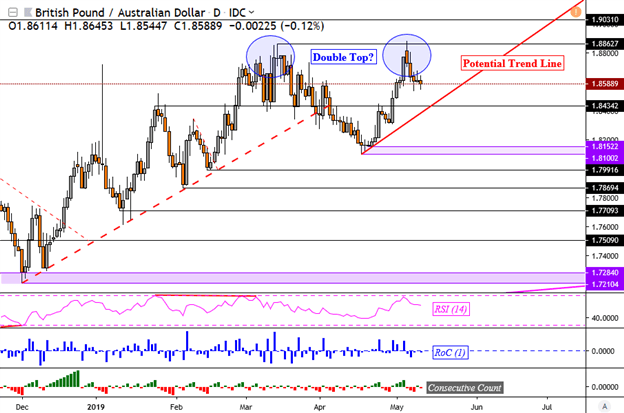 Looking for a fundamental perspective on AUD?