AUD/USD dropped after Chinese trade data crossed the wires and substantially undershot forecasts. In US Dollar denominated terms, the trade balance came in at $4.12b, missing the $26.20b forecast – the smallest surplus since March 2018. S&P500 futures also took a hit while the anti-risk Japanese yen rose against the US Dollar. 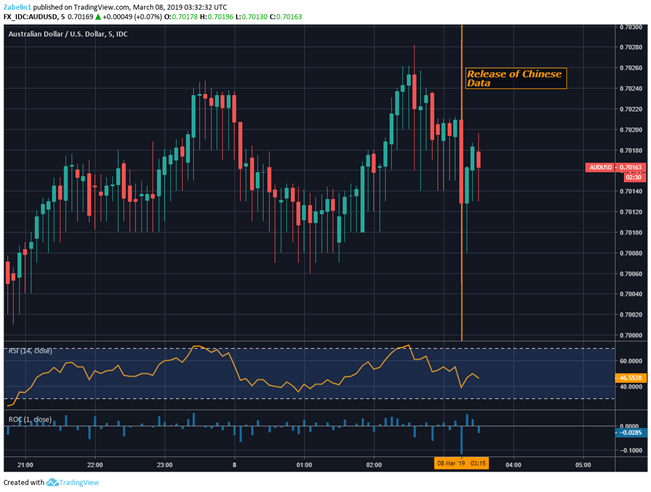 China’s underperforming economic data is likely the result of the trade wars which has weighed on broader global sentiment and put hundreds of billions of dollars of tariffs on Chinese goods. Since late-February, economic news flow out of China has been underperforming relative to economists’ expectations according to the Citi Group Economic Surprise Index. The trade wars appear to be a significant culprit.

As Australia’s largest trading partner, the Aussie understandably was in pain as it likely fueled more expectations that the RBA will cut rates soon. This follows Governor Philip Lowe’s comment saying that it is “hard to see a scenario where rates rise this year”. Overnight index swaps are now pricing in a higher p75.4% chance of a cut by the end of this year.

In the immediate future, the Australian Dollar eyes China’s CPI release tomorrow. Looking further ahead, the Aussie will continue to face developments in US-China trade negotiations but may find it difficult to aim higher in a scenario where the two reach a deal. Worries of slower global growth is beginning to dominate headlines as the primary factor weighing on risk appetite. A resolution between Beijing and Washington may not be enough to lift bullish spirits and restore confidence, as has been the case lately.