AUDUSD spiked over 0.60 percent after Australian economic data crossed the wires and caught traders off-guard with better-than-expected results. Month-on-month retail sales came in at 0.8%, beating the 0.3% forecast with the country’s trade balance reporting a A$4801m surplus, beating the A$3700 forecast and holding the rank of the largest one-month surplus in the country’s history. 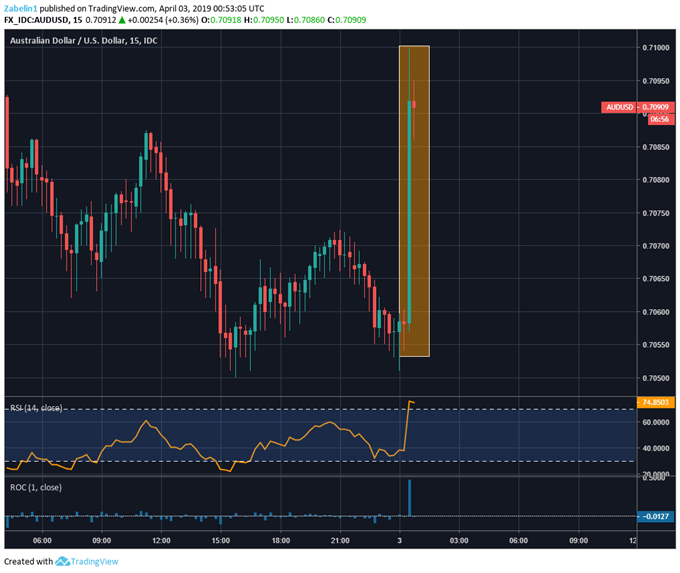 This follows yesterday’s release of the RBA interest rate decision that sent the Aussie violently swinging at both ends of the candle before trading lower. The central bank cautioned against slower global growth and domestic weakness in household consumption against the backdrop of the havoc wreaked by the US-China trade conflict. However, recent headlines have revealed the two are making progress.

Looking ahead, tomorrow Chinese Vice Premier Liu He will be arriving with a delegation in Washington to continue the trade talks between Treasury Secretary Steve Mnuchin and Trade Representative Robert Lighthizer. President Donald Trump and Xi Jinpin are expected to meet this spring to finalize a trade agreement and end the economic ceasefire.

However, a conclusion to the trade war may not lift broader global sentiment as fears of a global slowdown begin to dominate headlines and weigh on sentiment-linked assets like the Australian Dollar. A conclusion to the US-China trade conflict may also open the door to a potential revival of EU-US trade tensions, potentially dampening the outlook for growth and increasing the probability that the RBA shifts to a more dovish approach to policy.