AUD/USD appears to be stuck in narrow range ahead of the Reserve Bank of Australia (RBA) meeting on June 4, but fresh developments coming out of the central bank is likely to shake up the near-term outlook for the Aussie Dollar exchange rate amid bets for a 25bp rate-cut.

AUD/USD holds above the monthly-low (0.6865) despite signs of slowing activity China, Australia’s largest trading partner, and the exchange rate may continue to congest over the coming days as the RBA insists that ‘a further decline in the unemployment rate would be consistent with achieving Australia’s medium-term inflation target.’

It remains to be seen if the RBA will reduce the official cash rate (OCR) to a fresh record-low as recent data prints indicate a robust labor market, and Governor Philip Lowe & Co. may merely attempt to buy more time as ‘the central forecast scenario remained for progress to be made on the Bank’s goals of reducing unemployment and returning inflation towards the midpoint of the target.’ In turn, more of the same from the RBA may ultimately keep AUD/USD afloat as the central bank appears to be in no rush to reestablish its rate cutting cycle.

However, it seems as though it will only be a matter of time before Governor Lowe & Co. take additional steps to insulate the economy as officials retain a dovish forward-guidance and insist that ‘without an easing in monetary policy over the next six months, growth and inflation outcomes would be expected to be less favourable than the central scenario.’

With that said, the RBA may take a preemptive approach in managing monetary policy especially as the U.S. and China struggle to reach a trade deal, but the recent rebound in AUD/USD appears to be shaking up market participation, with retail sentiment coming off an extreme reading. 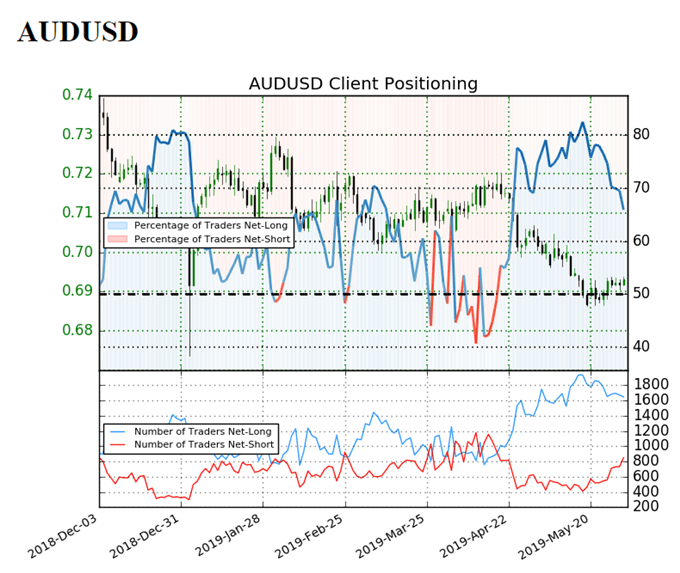 The IG Client Sentiment Report shows65.9%of traders are now net-long AUD/USD compared to 69.4% earlier this week, with the ratio of traders long to short at 1.94 to 1. In fact, traders have been net-long since April 18 when AUD/USD traded near 0.7160 even though price has moved 3.4% lower since then.

The tilt in the sentiment index offers a contrarian view as AUD/USD continues to track the bearish trend from late last year, but the jump in net-short position suggest the retail crowd is positioning for range-bound conditions as the exchange rate fails to extend the rebound from the monthly-low (0.6865).

Keep in mind, the AUD/USD rebound following the currency market flash-crash has been capped by the 200-Day SMA (0.7130), with the exchange rate marking another failed attempt to break/close above the moving average in April.

Next downside hurdle comes in around 0.6730 (100% expansion), but will keep a close eye on the RSI as the oscillator bounces back from oversold territory, with the development raising the risk for a larger rebound in the aussie-dollar exchange rate.