AUD/USD trades to fresh weekly lows as updates to the U.S. Gross Domestic Product (GDP) report undermine the recent shift in Fed rhetoric, and the exchange rate may face a more bearish fate over the coming days if the Relative Strength Index (RSI) fails to preserve the upward trend from earlier this year. 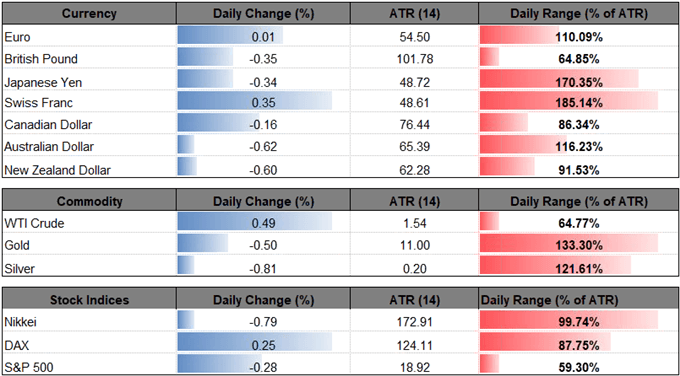 AUD/USD gives back the advance from earlier this month even though President Donald Trump delays the fresh round of tariffs targeting China, Australia’s largest trading partner, and uncertainty surrounding the Asia/Pacific region may continue to drag on the aussie-dollar exchange rate as U.S. Trade Representative Robert Lighthizer warns that ‘much still needs to be done before an agreement can be reached.’

In response, the Reserve Bank of Australia (RBA) is likely to keep the official cash rate (OCR) on hold at its next meeting on March 5 as Governor Philp Lowe informs Parliament that ‘the probability that the next move is up and the probability that it is down are more evenly balanced than they were six months ago,’ and the weakening outlook for global growth may encourage the central bank to endorse a wait-and-see approach throughout the first-half of the year as Chinaendures‘the effects of the tensions with the United States and the squeezing of finance to the private sector as the authorities seek to rein in non-bank financing.’

As a result, the RBA may show a greater willingness to further support the economy as Governor Lowe states that ‘available data suggest that the underlying trend in consumption is softer than it earlier looked to be,’ and the Australian dollar stands at risk of facing headwinds over the coming days if the central bank shows a greater willingness to revive its easing-cycle. Keep in mind, the AUD/USD remains tilted to the downside as the flash-crash rebound stalls at the 200-Day SMA (0.7252), with the Relative Strength Index (RSI) at risk of highlighting a bearish trigger if the oscillator snaps the upward trend from earlier this year. Sign up and join DailyFX Currency Analyst David Song LIVE for an opportunity to discuss potential trade setups. 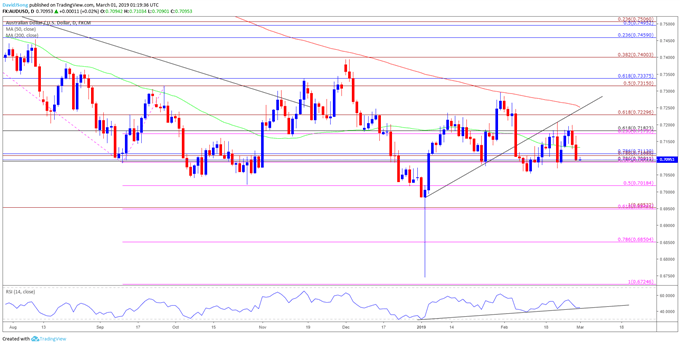