The Reserve Bank of Australia (RBA) interest rate decision may drag on the AUD/USD exchange rate as the central bank is widely anticipated to keep the official cash rate (OCR) at the record-low of 1.50% in April.

It seems as though the RBA will continue to endorse a wait-and-see approach monetary policy as the central bank sees ‘scenarios where an increase in the cash rate would be appropriate at some point and other scenarios where a decrease in the cash rate would be appropriate.’ Mixed language coming out of the RBA is likely to weigh on the Australian dollar as the central bank looks to further support the economy, and Governor Philip Lowe & Co. may continue to tame bets for higher interest rates as officials note ‘that there was not a strong case for a near-term adjustment in monetary policy.’

However, an unexpected batch of hawkish rhetoric may trigger a bullish reaction in AUD/USD as it spurs bets for an RBA rate-hike, and a upcoming change in regime may heighten the appeal of the Australian dollar as market participants prepare for higher interest rates. Sign up and join DailyFX Currency Analyst David Song LIVE for an opportunity to discuss potential trade setups.

As expected, the Reserve Bank of Australia (RBA) kept the official cash rate (OCR) at the record-low of 1.50% in March, with the central bank warning that the ‘slower pace of growth has continued into 2019’ as Governor Philip Lowe & Co. appear to be in no rush to alter the outlook for monetary policy. The RBA went onto say that ‘other indicators suggest growth in the Australian economy slowed over the second half of 2018,’ and it seems as though the central bank is in no rush to alter the monetary policy outlook as ‘the low level of interest rates is continuing to support the Australian economy.’

Nevertheless, the mixed rhetoric coming out of the RBA sparked a choppy reaction in the Australian dollar, with AUD/USD largely consolidating throughout the day to close at 0.7084. Learn more with the DailyFX Advanced Guide for Trading the News. 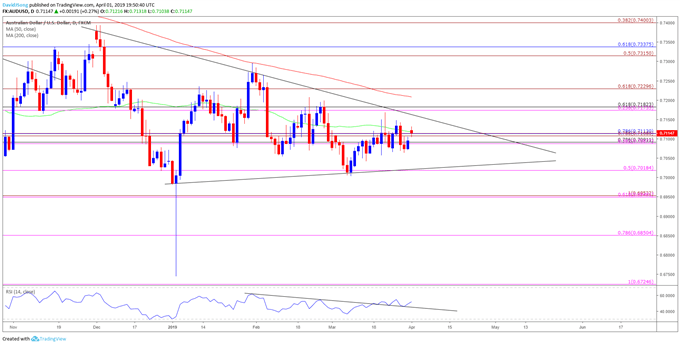