AUD/USD extends the decline from earlier this week as updates to Australia’s Gross Domestic Product (GDP) report reveal a slowing economy, and the flash-crash rebound may continue to unravel over the coming days as the Relative Strength Index (RSI) snaps the upward trend from earlier this year. 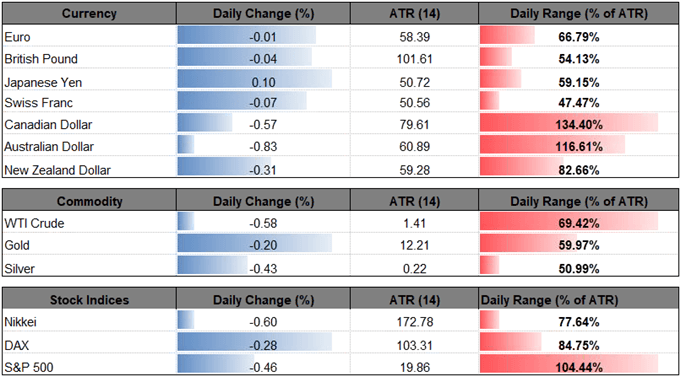 AUD/USD trades to fresh monthly lows as Australia’s 4Q GDP report shows the growth rate increasing 2.3% versus expectations for a 2.6% expansion, and the reaction to the below-forecast print keeps the Australian dollar susceptible to near-term headwinds as the weakening outlook for the Asia/Pacific region encourages the Reserve Bank of Australia (RBA) to further support the economy.

In turn, a 0.3% rebound in Australia Retail Sales may do little to heighten the appeal of the Australian dollar as updates to the Balance of Payments (BoP) are expected to show the trade balance surplus narrowing to A$2900M from A$3681M in December.

The weakening outlook for global growth may become a greater concern for the RBA as the Organization for Economic Co-operation and Development (OECD) continues to reduce its outlook, with the group now projecting the world economy to grow 3.3% in 2019 compared to its previous forecast of 3.5%. In response, the RBA may continue to tame bets for higher interest rates as Governor Philip Lowe argues that ‘the Board’s judgement remains that the most appropriate course is to maintain the cash rate at its current level,’ and it seems as though the central bank will continue to endorse a wait-and-see approach at its next meeting on April 1 as ‘the low level of interest rates is continuing to support the Australian economy.’

However, the RBA may continue to change its tune over the coming months as ‘members noted that there weresignificant uncertainties around the forecasts, with scenarios where an increase in the cash rate would beappropriate at some point and other scenarios where a decrease in the cash rate would be appropriate,’ and the Australian dollar stands at risk of facing a more bearish fate over the coming months should Governor Lowe & Co. show a greater willingness to implement a rate-cut.

With that said, the flash-crash rebound from 0.6745 may continue unravel as AUD/USD reverses course ahead of the 200-Day SMA (0.7249), and recent developments in the Relative Strength Index (RSI) warning of a further decline in the exchange rate as the oscillator snaps the bullish formation from earlier this year. Sign up and join DailyFX Currency Analyst David Song LIVE for an opportunity to discuss potential trade setups. 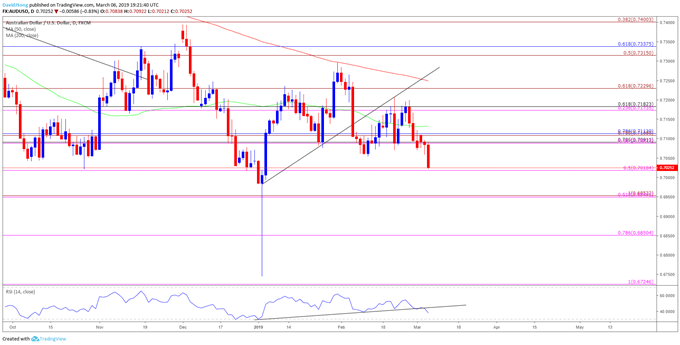