To see what fundamental drivers and technical signposts DailyFX analysts are watching, check out the Q2 forecasts for various markets on the DailyFX Trading Guides page.

AUDUSD is flirting with a full break of the 7000 level

Over the weekend, the Trade War between the U.S. and China took another turn for the worse, which has the risk-trade moving in reverse and potentially on the verge of causing a key break in Aussie. The 7000 level is no secret as being an important one.

It marks a few lows as well as the bottom of a big-picture descending wedge when you take out the blip that was the January flash-crash in JPY and other currencies that responded in sympathy. The gap to start the week isn’t how you necessarily want to see a breakdown develop given the propensity for weekend gaps in FX to get filled, but nevertheless the vulnerability of the 7000-line is becoming increasingly exposed.

A solid close into the 6900s could soon set off a trend lower that will have price eventually testing the flash-crash levels down in the 6700s, or worse. This week may turn out to be that pivotal point in time where the path of least resistance (lower) becomes clear.

A bounce that keeps AUDUSD still in play above 7000 may carry up towards the downward sloping line of the descending wedge & 200-day, but the broader trend and price pattern will continue to keep pressure on. It will take significant work to turn the outlook for Aussie bullish. 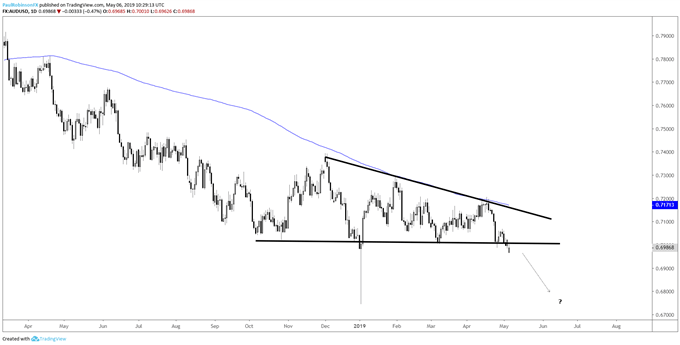 AUDJPY is currently outside of multi-month range

AUDJPY has been a tricky pair for some time now, by either just spending time creating a well-defined range and thus keeping trading conditions or head-faking traders on the long-side as it did recently when it briefly broke the range. The top-side breakout ran into problems around the 200-day immediately following and given it was against the longer-term trend it didn’t have the most appeal.

However, with the head-fake higher and now possible breakdown out the bottom of the range (which is in-line with the long-term trend), AUDJPY could be on the verge of a sustainable move. Again, the gap isn’t ideal and so a push back inside the range may develop. But if sustained trade below the multi-month range is maintained, then look for weakness to carry the cross-rate lower into flash-crash territory in the low-7000s.