In the aftermath of the interest rate cut by the Reserve Bank of Australia (RBA) on Tuesday, currency market participants shift their attention to the upcoming Aussie 1Q GDP report. While one might expect a central bank rate cut to weigh negatively on a country’s currency, the Australian Dollar has fared quite well against its major counterparts. The lack of AUD downside is primarily owed to markets already pricing in an RBA rate cut as near certainty prior to the RBA’s formal announcement.

Follow-up commentary provided by RBA Governor Lowe sent a relatively upbeat message which downplayed the potential need for further easing and helped boost the Aussie. Now, forex traders will likely turn to Australian GDP data due for release Wednesday at 1:30 GMT for clues to where the Australian Dollar might head next. 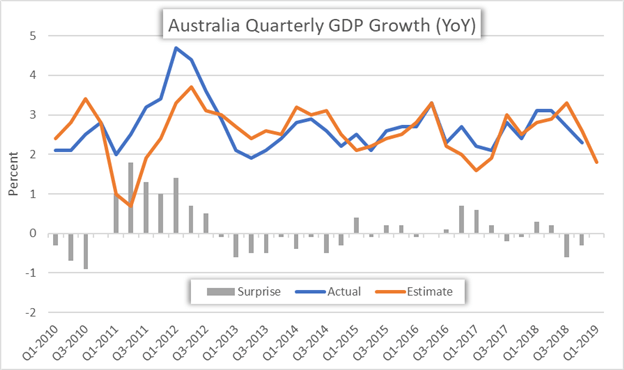 Aussie Q1 GDP is expected to slow to 1.8 percent and is set to be the third consecutive quarter of decelerating economic activity. The high-impact data point will compare to the prior period’s 2.3 percent reading which noticeably missed the market’s median consensus of 2.6 percent. Australia 2018 Q3 GDP of 2.7 percent also came in markedly lower than estimates of 3.3 percent.

The risk of Australian GDP surprising to the downside once again cannot be ruled out considering the several hinderances faced by the Aussie economy. The primary threat highlights the spillover effect from the ongoing US China trade war considering Australian GDP is highly dependent on economic activity in China. 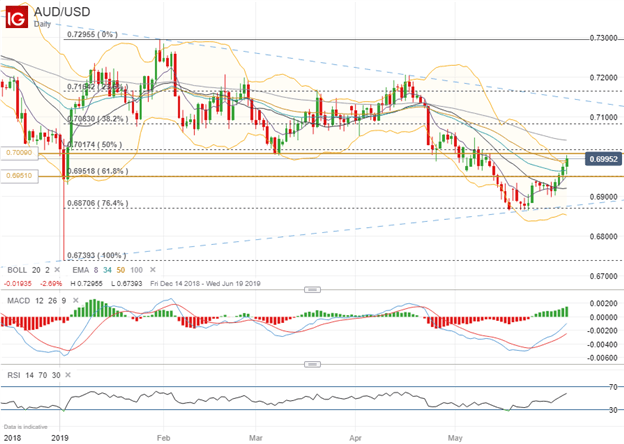 AUDUSD could continue on its recent steep ascent, however, if Australian GDP beats expectations Wednesday. Although, upside in spot AUDUSD may be limited as the currency pair faces technical resistance near the 50 percent retracement from the January flash crash low. This level is slightly above the upper bound of the 1-standard deviation trading range calculated from AUDUSD overnight implied volatility of 8.02 percent.

Downside in AUDUSD is estimated to be limited by the option implied lower bound of 0.6951 and technical support from the 61.8 percent Fibonacci retracement level. Yet, it is worth mentioning that AUDUSD price action could be clouded by moves in the US Dollar which is likely eying upcoming ISM services PMI data due Wednesday and nonfarm payrolls numbers expected Friday. 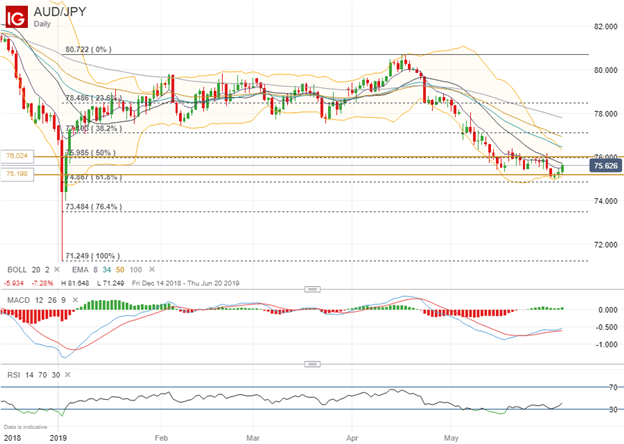 AUDJPY is estimated to trade between 75.198 and 76.024 with a 68 percent statistical probability judging by overnight implied volatility of 10.45 percent. The currency pair faces technical resistance from downward sloping moving averages, but spot prices have potential to reclaim the 76.00 handle and trade above the 50 percent retracement from its year-to-date high if Aussie GDP beats estimates. Conversely, if the GDP data disappoints, AUDJPY could plunge quickly as risk aversion will likely grapple markets and send forex traders unwinding carry trades. 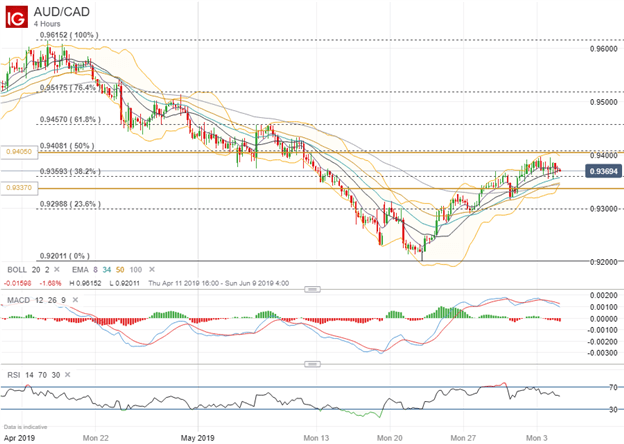 In contrast, while AUDCAD may be a less conventional currency pair, it may provide traders with a better look at the Australian Dollar’s reaction to Wednesday’s GDP report. This is largely due to the fact that the Canadian Dollar will not face the same degree of distractions – or “noise” – as the US Dollar and Japanese Yen are set to experience over the coming days. That being said, the options derived trading range calculated using AUDCAD’s overnight implied volatility reading of 6.84 percent sees spot rates to fluctuating between 0.9337 and 0.94050 with a 68 percent statistical probability.