The Australian Dollar was barely moved by news of a strong trade surplus on Thursday, possibly because there is little immediate pass-through from these data to interest rate expectations.

April’s surplus came in at AUD4.871 billion (US$3.39 billion). That was below both market expectations (AUD5 billion) and the AUD4.898 billion seen in March, but still represents a pretty healthy showing, particularly in the current febrile world trade environment.

Exports grew by 2.5% on the month and surged by an impressive 17.2% on the year. Imports rose by 2.8% and 5.4%, respectively. The numbers suggest that Australia is weathering trade storms pretty well, with both export and local demand holding up.

AUD/USD bulls drew scant comfort from this, however, with the pair ticking moderately lower after the release. 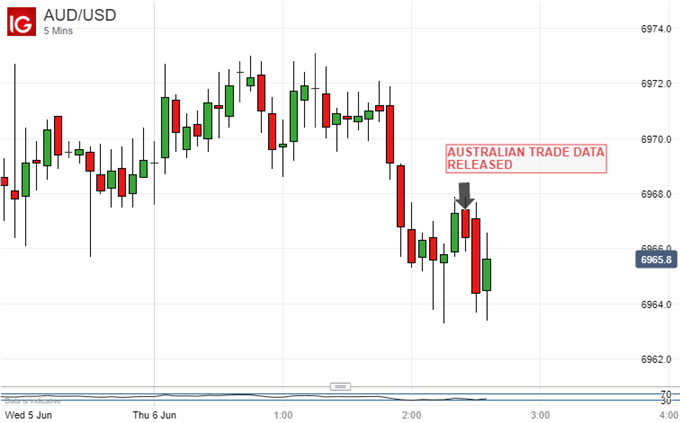 The Australian Dollar remains biased lower on its daily chart, as it has since the start of 2018. Much of the early pressure on it was rooted in the rise of US interest rates while Australia’s remained at record lows. Now, even though, the likely pace of US rate rises has been rethought, Australian rates have just been cut once and the market firmly believes that there’s more loosening to come. 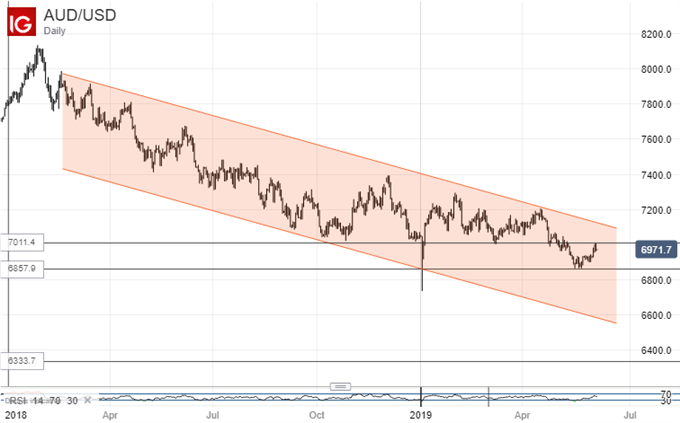 The currency is also particularly dogged by trade war fears, which hit it many ways. The Aussie is often a foreign exchange market proxy for China growth. There are clear signs that trade turmoil is crimping that, but the threat to global growth prospects is also weighing on the unit, in addition to its own clear lack of interest rate support.

The latest data suggest that so far at least global storms are not battering the Australian economy very hard, and may even be helping it as importers everywhere look for alternatives to goods now under US or Chinese tariffs.

However the currency will remain vulnerable to volatile risk-appetite switches for at least as long as it is perceived to have very little domestic monetary policy support. That perception is likely to last for quite some time yet, and almost certainly for the remainder of this year.