The Australian Dollar remains on its back foot today with the currency extending its recent string of losses. In fact, spot AUDUSD is currently trading at an intraday low of 0.6954 which is its lowest price since the aftermath of the Japanese Yen flash crash.

AUDUSD came under renewed pressure after headlines crossed the wires that China will escalate the Sino-American trade war with raising tariffs on $60 billion of US imports. The retaliation by the Chinese is rumored to also include halting the purchase of US agricultural goods, reducing Boeing aircraft orders and restricting US services trade with China. 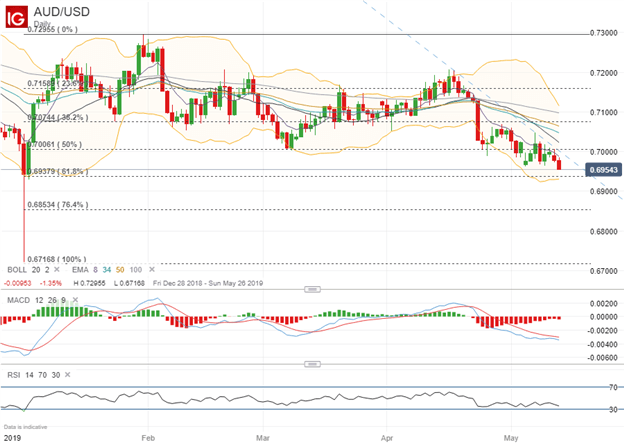 The Australian Dollar has been adversely impacted by the ongoing trade tension between the two largest economies in the world due to Australia’s heavy reliance on exports to China. Consequently, weakness in Chinese economic growth has been closely mirrored by the Aussie.

Concerns over the latest trade friction between the US and China are accumulating quickly and weighing negatively on risk assets due to the market’s dampened expectation of global economic growth rebounding higher later this year.

This could be contributing to the increase in RBA rate cut bets according to overnight indexed swaps pricing which have risen from 21 percent last week to 34 percent today for the June meeting. Odds of a rate cut could rise further and exacerbate recent weakness in AUDUSD if Thursday’s looming Australian jobs report disappoints. 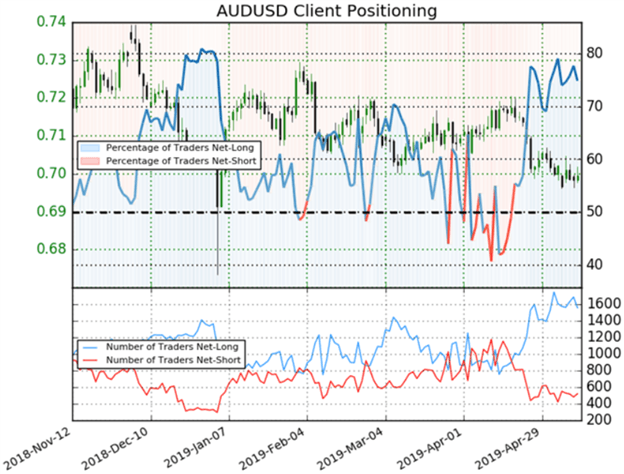 Despite the recent string of losses in spot AUDUSD, majority of retail currency traders remain bullish on the Aussie according to IG client positioning data. The AUDUSD trader sentiment reading shows that 74.9 percent of traders are net-long with the ratio of traders long to short at 2.98 to 1. Although, the number of traders net-long is 14.5 percent lower than Friday and 13.9 percent lower than last week. Interpreting crowd sentiment with a contrarian lens, this data could indicate that that spot AUDUSD may continue to fall.