EUR: The Euro and German yields had been underpinned this morning by a slew of better than expected services PMI figures from the Eurozone. Elsewhere, Brexit is continuing to move towards a softer direction following Theresa May’s reach out to Labour Leader Jeremy Corbyn. However, risks to the Euro-Area continue to remain tilted to the downside, while CFTC data continues to show that investors remain bearish on the Euro with net shorts valued at over $11bln.

GBP: The Pound is trading with modest gains after Theresa May reached out to Jeremy Corbyn to reach a Brexit compromise. However, GBPUSD fell short of breaking above the 1.32 handle after a surprisingly weak services PMI report, which had fell into contractionary territory, hitting its lowest level since July 2016. GBP remains volatile and will continue to do so until the Brexit uncertainty clears.

AUD: Risk on currencies and in particular the Aussie is notably firmer this morning with talk of a softer Brexit and US/China trade talks making headway for a deal lift sentiment. Alongside this, the Aussie had also found comfort from better than expected retail sales and trade data. However, with a cluster of DMA from 0.7120-0.72 further upside may be somewhat limited. 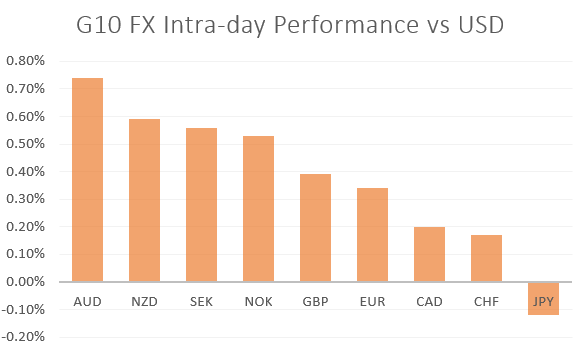