Join our analysts for live, interactive coverage of all major Australian economic data at the DailyFX Webinars. We’d love to have you along.

The Australian Dollar rose to two-week highs against its US counterparty Monday following the release of a better-than-expected survey of Chinese manufacturing.

The May Purchasing Managers Index from media group Caixin came in at 50.2, matching April’s figure and above the 50.0 print expected. The effect of the number was probably as much psychological as substantive though.

In the logic of PMIs any reading below 50 signifies contraction for the economic sector in question and the official manufacturing PMI returned to sub-50 territory last month after just a couple of months’ recovery.

So markets were probably very relieved to see that at least the smaller, private firms monitored by Caixin had managed to hang on above the 50 mark even if the large, state-tied firms of the official survey did not. 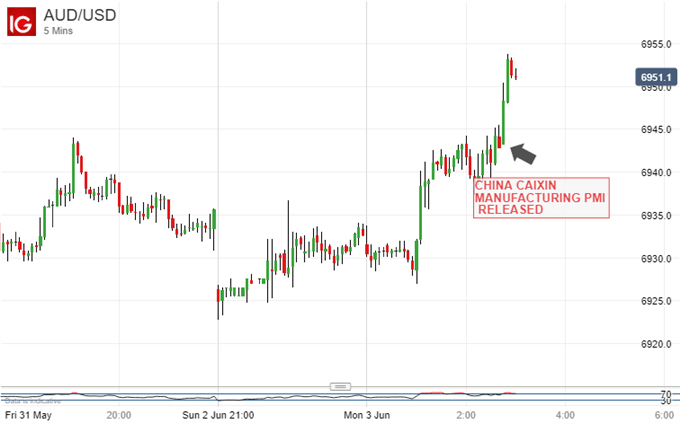 Still, on its broader, daily Chart AUD/USD remains very much within the long downtrend channel which has been in place since early 2018. Initially the Aussie suffered as US interest rates rose while Australia’s Official Cash Rate remained at record lows.

A rethink about the likely path of US rates gave the pair a little respite between November last year and April. However, now the market believes that Australian monetary policy will be loosened, with the first rate cut tipped to come this very week. The Reserve Bank of Australia will give its June decision on Tuesday. 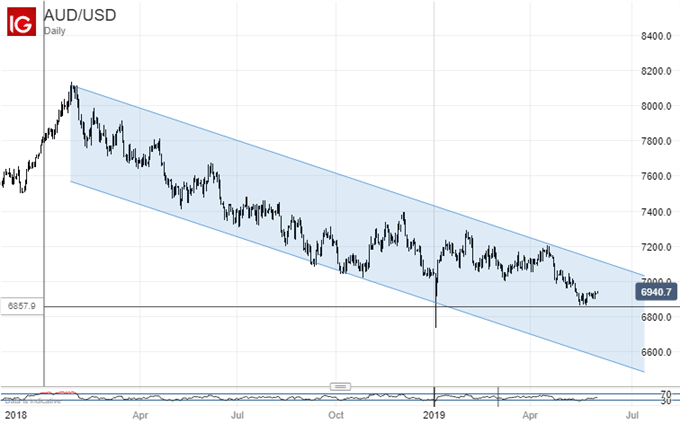 The Australian Dollar has also been hit hard by the ongoing trade war between China and the US. Australia has famed raw material export links with China but strong defense and political ties to Washington so arguably has as much invested in a durable settlement as any third country.

Clearly the currency faces hurdles both foreign and domestic, with the glowering backdrop of risk aversion doing it no favors at all. It’s not surprising therefore that the currency should be flirting with its lows for 2019 right now, with very little prospect of them holding.