The Australian Dollar spiked following the release of impressive employment data. 25.7 thousand jobs were added, beating the 15.0 thousand forecast with the previous report being revised upward from 4.6 thousand to 10.7 thousand. While the unemployment rate did rise to five percent – as analysts had estimated – so too did the participation rate. 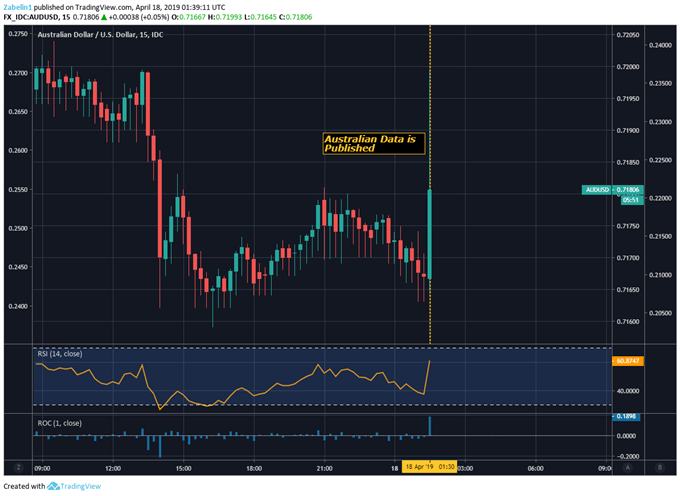 According to the Citi Economic Surprise Index, Australia’s has been outperforming relative to economists’ expectations. It seems as though the better-than-expected employment data fell in-line with the broader trend in economic activity. This comes as China – Australia’s largest trading partner – has begun to make a modest recoveryafter introducing economically-stimulative policies.

The data could also have a significant impact on the Reserve Bank of Australia’s monetary policy outlook. At the latest policy meeting, officials stated that they see no case for near-term adjustment in rates and stated that the outlook remains balanced. Meaning, the probability of a cut or a hike is relatively equal. This data could reduce rate cut expectations amidst the RBA’s concern over unemployment and its effect on inflationary pressure.

However, the Aussie’s jump struggled to be sustained following the employment data. It also reacted with greater enthusiasm to bad news – like New Zealand’s recent CPI data – than to good news. This signals a possible bearish bias toward Aussie. Looking ahead, the sentiment-linked currency will continue to monitor the global economy with a particularly close eye on US-China trade relations.