AUDUSD, which is widely seen in the markets as a proxy for China, has firmed after the latest Chinese economic data and the rally could extend further.

The figures showed GDP in China grew by 6.4% year/year in the first quarter of 2019, unchanged from the previous quarter and just above the 6.3% predicted in a survey of economists. More importantly, industrial production was up a hefty 8.5% year/year in March, well above the forecast 5.9%.

Retail sales data were strong too, showing an increase of 8.7% year/year in March rather than the 8.4% expected. That boosted the AUDUSD price, which continues to rise within an upward-sloping channel on the charts. 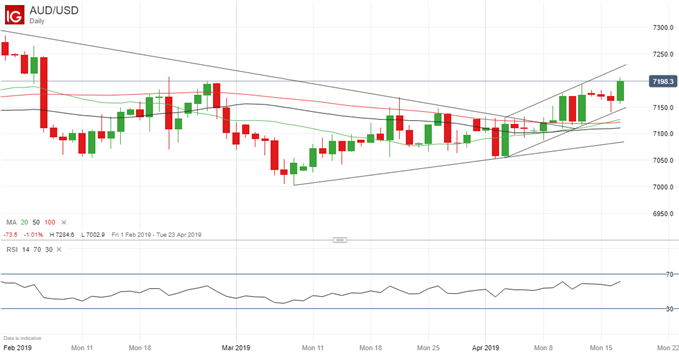 The AUDUSD price is widely seen as a proxy for China because of Australia’s reliance on exports to the country, which seems to be defying concerns about a further slowdown. However, while the numbers suggest that Beijing’s fiscal stimulus is having a positive impact, it is still too early to forecast sustained growth.

Nonetheless, the technical picture is constructive and further AUDUSD strength is now on the cards as long as future data continue to point to China’s economy steadying and optimism persists about a successful conclusion to the US-China trade talks.