The Australian Dollar, which slipped lower against its US counterpart between late January and early April, looks to have broken to the upside, helped by tentative signs of a recovery in China.

China is an important market for Australian exports so its economy is a major driver of the Aussie Dollar and news Thursday of a pickup in Chinese factory-gate inflation in March suggests that China’s economy could be reviving, helped by infrastructure spending and tax cuts.

For AUDUSD, that should outweigh any concerns about an Australian Federal election set for May 18 by Prime Minister Scott Morrison Thursday. Polls suggest the opposition center-left Australian Labor Party, led by Bill Shorten, is ahead of Morrison’s Liberal-National coalition. 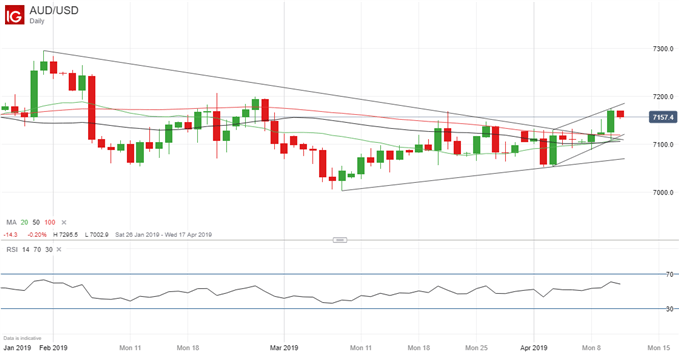 The International Monetary Fund forecast this week that Australia’s economic growth will slow in 2019 to 2.1% from 2.8% in 2018, lowering its prediction for this year by 0.7 percentage points from its previous projection last October. Such an economic slowdown could lead to one or more interest rate cuts by the Reserve Bank of Australia this year.

However, for now, AUDUSD looks to be in a good place to continue its recent rally.